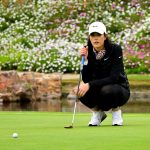 AimPoint putting is all the rage in golf.

SAN FRANCISCO — When it comes to putting, everyone has their own technique. Some opt for using feel to get them around the greens, such as Ben Crenshaw, while others stick to technical aspects of putting, like Bryson DeChambeau.

That thinking is the same for reading greens. It all comes down to what makes players the most comfortable. Lately, AimPoint putting is all the rage as it’s been utilized across the ranks of pro golf by the likes of Dustin Johnson and Justin Rose.

Michelle Wie West is another disciple of AimPoint, and as she explained to GOLF.com, it will be a huge key for holing putts this week at the Olympic Club during the U.S. Women’s Open.

“There are a lot of optical illusions on a golf course,” Wie West said. “You can’t always trust your eye. This golf course is a good example. It was built on the side of a hill, so even though the green looks flat, it still breaks.”

That’s where the AimPoint technique comes into play. Instead of solely relying on her eyes to read a putt, Wie West uses her feet and lets feel tell her how the putt will break.

“With your feet, if you do it the right way, your feet will tell you immediately which side is higher,” she said. “I really like that it brings feel into putting.”

Wie West has been using the technique since it was first introduced last decade. She took a lesson from Mark Sweeney and was immediately hooked.

And since she began with AimPoint, she’s watched how other top players use the technique to fine-tune her own process.

“I’m really inspired by how DJ uses it, and how feel-based it is,” Wie West said. “AimPoint really allows you to trust it.”

On a course as subtle and nuanced as the Olympic Club, trust will be all the more important when holing putts.