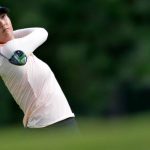 Michelle Wie West will play the weekend at a major for the first time since 2018 after sneaking inside the cutline at Atlanta Athletic Club.

JOHNS CREEK, Ga. — For the first time since 2018, Michelle Wie West will play the weekend at a major championship.

The 31-year-old got inside the cut line after the second round of the KPMG Women’s PGA Championship, shooting a three-under 69 to get to two over for the week.

“[I’m] very proud of myself for pushing through,” Wie West said. “Hopefully I can shoot low this weekend.”

Wie West began the day well outside the cut line after a first-round 77, but she played inspired golf out of the gates as she carded a birdie on No. 2. She then made back-to-back birdies on Nos. 4 and 5 before adding another on the 7th to get to four under for the day.

“It felt really good to go out there,” she said. “That was the first time since a really long time where I felt like every hole looked like a birdie hole to me. So that was a lot of fun.”

The hole shrunk a bit for Wie West over the middle portion of the round, but she was still able to play some solid golf. Following the birdie on 7, Wie West made bogey on the 8th for her first dropped shot of the day.

Her back nine started much the way her opening nine did as she birdied 10 to reach four under once again, but that momentum was erased with a bogey on No. 11. Wie West held steady the rest of the round as she strung together seven consecutive pars to get into the clubhouse at three under for the day to secure a Saturday tee time.

Just two years ago at the KPMG Women’s PGA Championship, Wie West was not sure if her health would allow her to continue a professional golf career. After firing rounds of 84 and 82 at Hazeltine National to miss the cut by 17 shots, the status of her lingering wrist injuries made her unsure if competitive golf would ever been an option again.

“It’s pretty crazy when you think about Hazeltine and where I was and where I am now,” she said. “I’m just eternally grateful that I have a chance to come back.”