The ANA Inspiration’s controversial wall is gone. But is that a good thing? Players weigh in 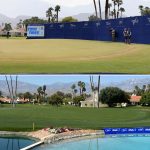 A look at the 18th green at the ANA last year (top) and this year (bottom).

RANCHO MIRAGE, Calif. — The 2020 edition of the ANA Inspiration was a bit different than the 48 iterations that had come prior. Fans weren’t in attendance as the world battled through the throes of a pandemic, and the players battled brutal September heat as the event took place in late summer as opposed to early spring. And, of course, there was that big blue wall.

For those not familiar, here’s a quick refresher. With no fans in attendance, the normal spectator build-out behind the par-5 18th green was absent. In its place however was a giant blue wall emblazoned with sponsorship branding. Besides being an eyesore, the wall also turned out to be a distinct competitive advantage — players could fire their balls at the island green with little fear of going long into the water, a practice commonly known as backstopping.

In as strange a year as ever, it was only fitting that the “Great Wall of Dinah” played a substantial role in the outcome of the tournament. When Mirim Lee lasered her approach on the finishing hole long of the green, her ball was kept dry by the grace of the wall. She took advantage of her good fortune by chipping in to force a playoff, which she eventually won.

That big blue wall, however, is nowhere to been seen this week. The only thing behind the green keeping a long errant shot from a watery grave is two trios of towering palm trees.

Golf purists will surely laude the absence of a man-made structure, but as Golfweek’s Beth Ann Nichols reported, many players don’t like the change of scenery.

“It’s been like that for years,” Mel Reid told Nichols concerning the backstop. “I don’t think they needed to change it, but I get why they have because it does look a little bit stupid with no crowd.”

Count Charley Hull among the crowd longing for the return of some sort of structure behind the green.

“I don’t like it without the grandstand. I think it’s completely different,” Hull said. “It’s a shame, because usually people play to that back left side because it is a tricky shot anyway. But yeah, it’s made it a bit different.”

Nelly Korda might seem like the player most in favor of the change, as she found herself on the wrong side of the wall controversy last year, but when speaking with the media this week, she claimed ambivalence on the matter.

“Undecided,” Korda said. “I wasn’t a fan of last year of how close they put it to the green. I feel like in the past years, those palm trees were definitely in the way … We’ll see how I like it during the tournament if it’s good or bad.”

At the other end of the spectrum are players like Georgia Hall. The former Women’s Open winner loves the new look of the hole, calling it a “great decision,” although even she conceded that far fewer players will go for the green without a backstop.

“The greens are probably the firmest I’ve seen them,” Hall said. “I will definitely be laying up unless I have an 8-iron in … You don’t want to make a mess of that hole.”

While a giant backstop won’t determine who’s jumping into Poppie’s Pond by week’s end, the lack thereof might plays its own role. But no matter the outcome, one thing is certain — the 72nd hole won’t lack for theatrics.

“It used to always be a dramatic finish,” Hall said. “But it will be even more dramatic [now].”