5 secrets to playing golf in extreme heat, according to LPGA pros 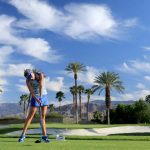 The weather at the ANA Inspiration might not be as balmy as 2020, but that doesn't mean it won't be hot.

RANCHO MIRAGE, Calif. — This year, the ANA Inspiration is back in its typical place on the calendar. After a pandemic-induced schedule alteration pushed golf’s first major to September last year, the event is back in its spring time slot.

The temperatures won’t be quite as intense as they were last summer, but that doesn’t mean the climate is mild this time of year in the Southern California desert. Highs for the week will be in the upper 80s with humidity in the single digits. In the desert, hot and dry is par for the course.

With such arid conditions forecasted for the week, players will have to adjust their nutritional intake in order to keep themselves performing at a high level. And while their scores might be unattainable for the average golfer, you can still learn from the way they tackle golf in the extreme heat.

Here are five keys for playing in the heat, according to LPGA Tour players.

When the temperatures are high, you will sweat at an increased rate. To deal with this excess perspiration, it’s important to increase your electrolyte intake throughout your round.

“You lose energy if you’re not drinking the right stuff,” LPGA Tour-winner Mel Reid says. “Hydration is key this week.”

“You really have to conserve your energy and stay hydrated out here,” Gabi Ruffels says. “Those are definitely the two most important things.”

It can be easy to trick yourself into thinking your blood sugar is well-balanced and then falling victim to malnutrition later in your round. Often by the time you start to feel the effects of not being behind on food and drink, it’s already too late. You have to be proactive about keeping yourself energized if you want to keep your performance levels up.

“Snack a lot,” says 2020 Women’s Open champion Sophia Popov. “You can underestimate the amount of calories you’re burning out there and the amount of energy you need. Because of the heat, I can’t eat quite as much, but I eat a lot more often during my rounds.”

4. Stick to a routine

You need to be constantly fueling yourself throughout the round. Don’t wait until you’re hungry or thirsty to start your intake. Instead, get into a consistent routine while you play to keep the nutrients in your body.

“I drink about a water every hole or two holes out here,” Lexi Thompson says. [And] when I get my rounds going, I’ll make sure to eat every two, three holes.”

It’s important to keep your body fueled, but if you are feeding it the wrong things, it can be detrimental to your performance as well.

“You’ve got to keep your energy up,” Reid says. “But if you have something heavy, it slows you down a little bit. Little snacks like protein balls or bananas are great for me.”