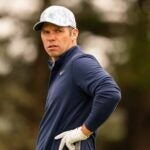 Paul Casey will tee it up alongside many other high-profile players at the Saudi International next year.

The 2021 Saudi International field will showcase quite a few big names: Masters champion Dustin Johnson, winner of the inaugural staging in 2019 and runner-up this year, will be there. So will U.S. Open champ Bryson DeChambeau, Phil Mickelson, Ian Poulter, Justin Rose, Sergio Garcia, Tommy Fleetwood, Tyrrell Hatton, Henrik Stenson, and Patrick Reed, to name a few. In short, the February tournament, which will be played the same week at the Waste Management Phoenix Open, looks like it will be a veritable who’s who of the world’s top players.

And next year, there will be one more notable Top 25 player among them: Englishman Paul Casey, who was vocal about his reasons for not playing when the tournament was first announced.

Gear up for your next round “There are a lot of places in the world that I have played and continue to go, which you could question … some human rights violations that governments have committed,” Casey, a UNICEF ambassador, said last year. “I thought I’d sit this one out.”

Casey, who re-joined the European Tour in 2018 in a bid to make the Ryder Cup team, apparently had a drastic change of heart.

“This is not a decision I’ve taken lightly. I wasn’t comfortable going in the past, but I have always been open minded and willing to learn,” Casey said in a statement reported by Golf Channel. “I believe sport has the power to affect change. I’ve listened to the Saudi’s commitment to this and their vision for the future. It is always better to include rather than exclude when eliciting change, thus I hope my participation will make a difference and I am looking forward to seeing these changes in person.”

The Saudi International is a part of the European Tour’s roster of tournaments, and in 2020 was the final leg of a three-week Middle Eastern swing that included stops Abu Dhabi and Dubai. Its spot on the schedule has been controversial from the outset. The first edition of the event was staged just months after the October killing of Jamal Khashoggi, a U.S. resident and journalist who had spoken out against Saudi Prince Mohammed bin Salman in Washington Post columns. Both Tiger Woods and Rory McIlroy reportedly turned down millions in appearance fees by opting not to play.

Whether Casey’s change of heart has an effect on other player decisions like Woods’ and McIlroy’s remains to be seen, but with a spot on the 2021 Ryder Cup team still up for grabs, Casey could certainly use a boost — he’s currently No. 47 on the European team’s points ranking.