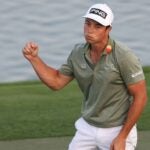 Viktor Hovland surged on the first playoff hole at the Dubai Desert Classic.

It was all over for Viktor Hovland at the Dubai Desert Classic, and then suddenly, it wasn’t.

The 24-year-old pro stood on the 16th tee with what could charitably be described as a snowball’s chance in hell at the title. He was a mile from the lead — some four strokes back — and fresh off a disappointing bogey that further deflated his chances on the 15th.

“At the start I thought, okay, we can keep pushing and maybe have a chance at it,” Hovland said afterward. “But after not making birdie on 10, and making a bogey on — the three-putt on 15, I thought I was pretty much out of it.”

But then, the golf gods struck.

It all amounted to a miraculous, three-hole turnaround for Hovland, and as time would tell, he’d need every stroke he earned coming back.

“I knew that was going to tie the lead but I knew they still had 13 and some easier holes to make birdie on,” Hovland said. “I knew I probably had to birdie the last as well to get them thinking a little bit.”

By the time the dust settled after Hovland’s round, not one but two players were threatening to tie his lead and send the tournament into a playoff. The first was Richard Bland, the 48-year-old everyman who captured the hearts of the golf world when he won his first-ever tournament at the British Masters last year. The second was Rory McIlroy, who was looking for his first victory of 2022 in Dubai.

Shortly after Hovland’s birdie rolled in on the 18th, McIlroy faced the decision of the tournament on the same hole. Should he try to reach the par-5 in two — attempting a challenging wood over the water — he’d all-but-secure the victory. Should he lay up short, he’d risk a tricky birdie putt that could send the tournament careening toward a three-way playoff with Hovland and Bland.

McIlroy elected the aggressive approach, pulling out a fairway wood. But as soon as he struck the shot, he lurched over. He’d heeled it directly into the lakebed. A shot and two putts later, he’d cost himself the tournament.

Back on the 18th for the first playoff hole, Hovland and Bland both nuked 3-woods over the lake and onto the green. A short-game contest ensued, and Hovland won out, draining a tournament-winning birdie on the 73rd hole — his fourth consecutive hole under-par — to win the tournament.

With the victory, Hovland moves to No. 3 in the world — his highest-ever ranking.

“Yeah, it’s pretty wild. I was asked, was it earlier this week, I was up to 5th and I was getting questions about how that felt. More of the same, I guess,” Hovland said with a laugh. “Being No. 3 is pretty crazy, but you know, that stuff can vary week-to-week and I’m not going to let that stuff dictate my mood or how I do things.”