The usually stoic Johnson was emotional after his win Sunday.

AUGUSTA, Ga. — The soul of the famous seasonal club here is more Southern than anything else, so in that sense, and in every sense, its newest unofficial member, Mr. Dustin, should feel right at home, here at the Augusta National, as the Texas golf legend Ben Hogan liked to call the place.

Hogan started the annual dinner for winners, requesting only that his fellow champions wear their club-issued green jackets to the Tuesday-night supper. With his win here on Sunday, Dustin Hunter Johnson, native son of South Carolina, has a seat at that table for the rest of his life. He’s going to be right at home, coat on.

“I think I look pretty good in green,” he told reporters. He’s a mega-talent. He’s a big physical presence. But there’s something almost shy and modest about him. That press-room “pretty good” comment is about the most immodest thing anybody has ever heard him say, at least in public.

Coming off the 18th green Sunday afternoon, as the winner by five shots, Johnson told Bubba Watson, native son of the Florida Panhandle and a two-time Masters winner, “I’ve been dreaming of putting on that jacket all my life.”

In two tournament rituals, one in Butler Cabin and later on the practice putting green, Tiger Woods, the defending champion and a five-time winner, helped Johnson into his new 42L club coat.

Woods, in interviews over the years, has always showed respect for Johnson’s ability. He often, before the Bryson Era, described Johnson as the longest hitter in the game, “because he has another gear.” In other words, when the conditions are right for his step-on-it power fade, as they are on Augusta’s par-4 17th, Johnson can hit it past anybody. On Sunday, on 17, Johnson was about half a football field ahead of Abraham Ancer and his second shot, after an uphill drive of 306 yards, was all of 146 yards.

There’s much overlap between Woods, who is 44, and Johnson, who is 36. They both play TaylorMade clubs. Johnson worked for years with Butch Harmon, Woods’s former swing coach. Woods’s caddie, Joe LaCava, previously worked for Johnson. Woods and Johnson both much prefer to have their clubs do their talking. But you wouldn’t call them close.

Woods and Johnson, at tournaments, rarely play practice rounds together. Johnson, who lives in Jupiter, Fla., doesn’t hang out at Tiger’s restaurant and bar there. (Johnson prefers places where you can wear flip-flops.) At last year’s Masters, Johnson finished a shot behind Woods. You’ll never hear Johnson gush about Woods. It’s not in his nature.

“Having Tiger put [the jacket] on me was awesome and unbelievable,” Johnson said. “You wouldn’t want it any other way. But any guy could put it on me, and I’d be just fine.”

Yes, the course played soft. As landing pads, the greens were welcoming and mushy, and far less wicked to putt. For the first three days the winds were gentle or nonexistent. There were no spectators to amp up the pressure. No matter. You play the course they give you, you play the best you can, you add up the numbers in the boxes, and that number is yours forever. As they say ’round these parts, Mazel tov, Dustin.

Nobody’s ever shot lower for 72 holes at a Masters, not in March, not in April — not in mid-November. There is no asterisk on this one. 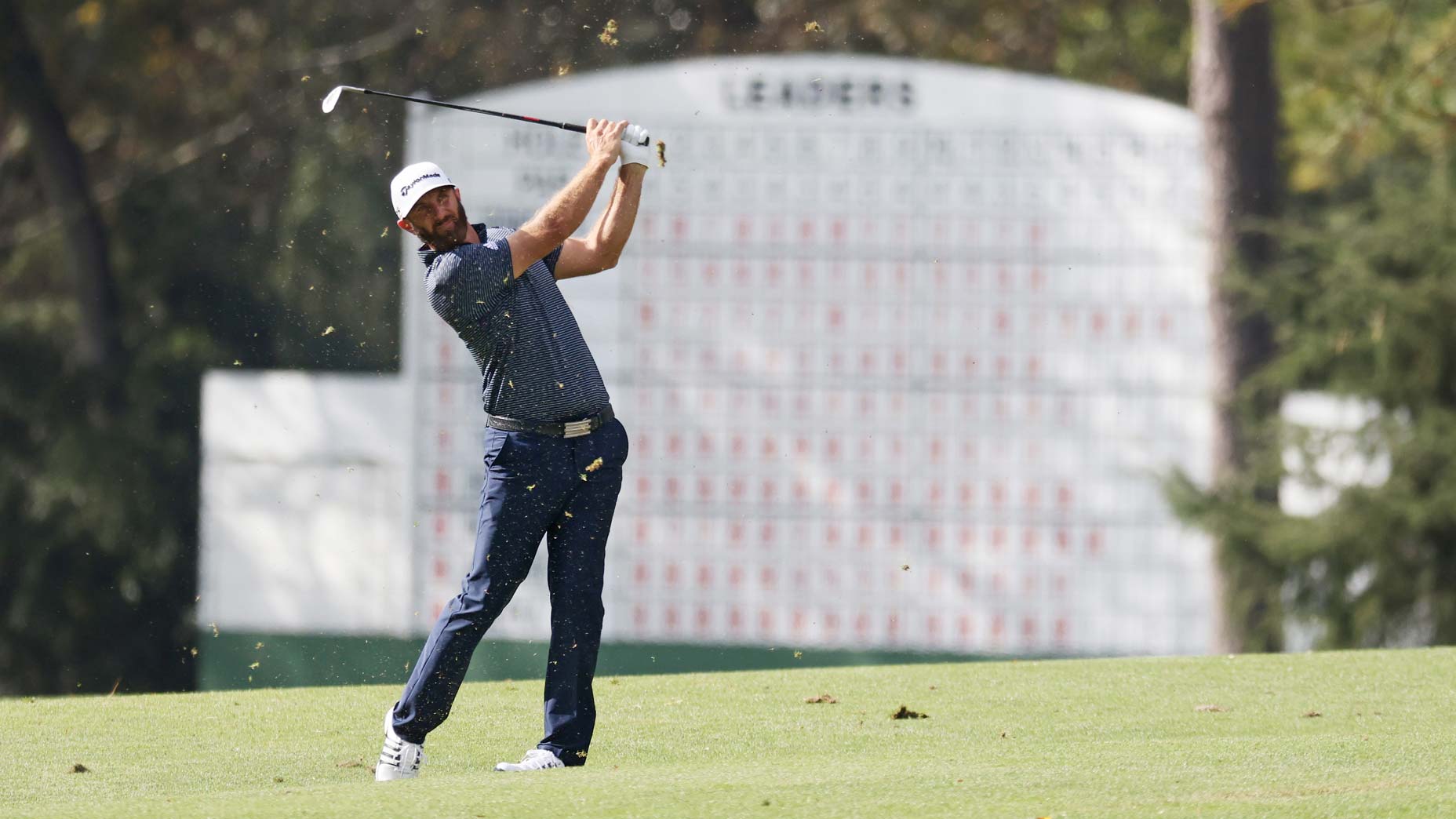 It’s a demanding course, even when you play it in 268 shots over four rounds. One of the clichés about the course is that it favors long high draw shots from right-handed golfers. That’s surely true on some shots — and not true on many more. Woods shot 270 23 years ago hitting the most beautiful draw shots imaginable, one after another. But he won last year hitting many more fade shots than draws. The Texas golf legend Jimmy Demaret, aka Wardrobe (for his stylish threads), won three Masters as a fader. Claude Harmon, winner of the 1948 Masters, felt that a fade shot was the way to play the course best. He taught that approach to his eldest son, Butch.

When Dustin Johnson left Coastal Carolina and turned pro, he was a draw-shot golfer if ever there was one. Butch Harmon turned him into a fader. Butch told him often over the years that a fade shot will do him wonders at Augusta National.

Consider all that as a preamble to what Johnson did on the par-3 12th hole, playing 158 yards on Sunday, over Rae’s Creek, into a sturdy right-to-left wind, with the pin in its usual middle-right location. Johnson, with the honor and wasting no time (he’s always ready to go, part of his recipe for tee-to-green success), hit a gorgeous, fading 8-iron right at a TV tower. It hit the wind, fell straight down and finished hole-high. He made par. Par is good there. So is dry.

He’s a golfing savant, although he can shoot some ridiculously high 36-hole scores. (He shot 80-80 in, needless to say, his only two rounds at the Memorial this year. But on that Friday night, Johnson was on the range, pounding one drive after another, chatting with another player, Will McGirt, of Boiling Springs, S.C., all the while.) On Sunday at Augusta he began the day with a four-shot lead. He didn’t play flawless, airtight golf, as he had on Saturday. But for the most part he played one smart shot after another, often on instinct alone.

He made one-putt, close-range birdies on the two back-nine par-5s after laying up short of the moat in front of the 13th green and the pond in front of the 15th. He kept his ball dry all through Amen Corner and all through the round. Had Francesco Molinari done that last year on Sunday, there would be a table setting for him, too.

Since Claude Harmon’s win in ’48, only three golfers have taken Sunday penalty shots from the back-nine creek and ponds and still won. There is no chance that Johnson knows that or cares. But he understands those facts of life, Masters-style, on instinct alone.

Johnson, so laconic, so talented, so golf-smart, grew up about 60 miles from here. He won this Masters without breaking a sweat, best anybody could tell, although you can never be too sure what’s going on with him, behind his bearded face and underneath his snug-fitting golf shirts. He doesn’t give up much, not in response to questions, not in response to good shots and bad ones, not in response to anything, really. His life motto is obvious: Keep on truckin’, in good times and in bad. He’s known both.

He won the 2016 U.S. Open at Oakmont, on a hideously difficult course. He’s won 24 times on Tour. He was already a first-ballot World Golf Hall of Famer, before this win. Nobody who follows golf can be surprised to see Johnson win this tournament, particularly under this year’s conditions. The surprise is everything he showed in the aftermath of victory, just a month after he was off the Tour for two weeks, and in quarantine, after testing positive for Covid-19.

In an outdoor interview with Amanda Balionis of CBS Sports, the new winner struggled to complete sentences as he tried to keep his eyes from welling. Balionis reminded him that Bubba Watson had shown the golf world that it was OK to cry. So has Tiger Woods. So has Ben Crenshaw. So has Jack Nicklaus. Johnson wasn’t so sure.

“I know 2020 has been a really strange year,” the winner said later, coat on and composed, speaking softly and slowly and with his customary and pleasant drawl. “But it’s been good to me.” He made $2.1 million on Sunday, plus a silver replica of the old plantation house that is now the clubhouse. That brings to mind these pitch-perfect sentences from his winner’s press conference:

Come April, on the first Tuesday night of the month, he’ll be treating Bubba and Tiger and all the other fellas to dinner, on the second floor of the Augusta National clubhouse. He’ll make remarks because they’re required. Then he’ll set himself down, pass the biscuits and take it all in. He’ll have the best seat in the house, the defending winner’s.