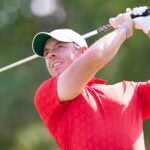 Rory McIlroy can do something that's never been done before on the European Tour.

After trailing by one shot heading into the DP World Tour Championship’s third round, Rory McIlroy is back on top with one round remaining in Dubai.

After firing a five-under 67 that featured seven birdies and two bogeys on Saturday, McIlroy now leads the field by one shot at 14 under par overall — putting himself in position to achieve something that’s never been done before on the European Tour: winning the Race to Dubai season finale a record three times.

McIlroy first won the event back in 2012 and claimed victory a second time in 2015.

If McIlroy were to raise the trophy on Sunday in Dubai, it would mark his first European Tour victory since the 2019 WGC-HSBC Champions, though he’s won twice on the PGA Tour since then: the 2020 Wells Fargo Championship and, more recently, October’s CJ Cup.

“I’m right where I want to be,” he said after his round. “I want to be contending on Sundays in golf tournaments and feel like I’m back to playing the way I should and the way that will get me back contending.”

Despite McIlroy’s recent resurgence, he has been stalled at his tally of four major championships since winning the PGA Championship in 2014. He needs a Masters win to complete the career grand slam.

Though McIlroy has had plenty of success in Dubai over the course of his career, winning on Sunday won’t be easy. His chasers include Shane Lowry and Collin Morikawa, both three shots back.

Could this MIT professor's theory be the PGA Tour's silent problem?