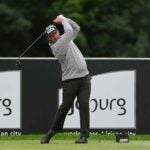 Thriston Lawrence now has plenty to celebrate over the holidays.

After playing only 36 holes, Thriston Lawrence became the first-ever winner on the newly rebranded DP World Tour, formerly known as the European Tour.

Like the PGA Tour, the DP World Tour has short turnaround time between seasons. Just last week, Collin Morikawa claimed the DP World Tour Championship and the Race to Dubai in the season’s culminating event. And this week, the new season began with the Joburg Open at Randpark Golf Club’s Firethorn Course in Johannesburg, South Africa.

A decision had already been made to shorten the tournament to 54 holes, given the World Health Organization declaration of the new “Omicron” Covid variant to be “of concern.” The U.S., EU, UK and Canada have since imposed travel restrictions on flights to and from South Africa and other countries in the region, prompting the Tour to cut the event down to allow players, caddies and personnel to return to their home countries.

Weather delays at the Joburg Open pushed the second round into Saturday, and when a poor forecast made the completion of a third round look unlikely, the tournament was called after 36 holes, granting Lawrence, the leader by four shots at 12 under par, his maiden victory.

With the win, Lawrence earns status on the DP World Tour through 2023, as well as an exemption into next summer’s Open Championship.

“It’s so surreal,” he said in the aftermath of his victory. “I don’t think anyone thought it would turn out this way, to finish on a Saturday afternoon but I’m just really thankful. It’s a life-changing moment for me.

“It’s been a goal, you want to see yourself up there but the last year and a half of Covid it’s been tough so you sort of see your dreams fade. For it to change this week is unbelievable.”

The DP World Tour now goes into an extended break through the holidays, picking back up with the Abu Dhabi HSBC Championship in January.