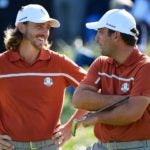 Tommy Fleetwood and Francesco Molinari make a formidable team in both foursomes and four-ball.

Most people who have played their fair share of golf know that there are lots of competitive formats you can play, such as stroke play, match play, skins games, etc. A couple of these formats — foursomes and four-ball — even sound suspiciously synonymous. But do you know the difference between the two? We break it down in this edition of Rules School.

Foursomes and four-ball might sound like they can be used interchangeably, but in practice, they are distinctly different games. With the formats dominating the team competitions such as the Ryder Cup and Solheim Cup, it’s important you know the differences. Here’s a brief rundown of what makes each format unique.

Foursomes is a form of team match or stroke play covered under Rule 22 in the Rules of Golf.

“(Foursomes is) a form of match play or stroke play where you and a partner compete as a side by playing one ball in alternating order on each hole. You and your partner must alternate in teeing off to start each hole.”

This format is also known as alternate shot.

Four-ball is also a form of team match or stroke play, and it is covered under Rule 23.

“Four-Ball is a form of play (in either match play or stroke play) involving partners where you and your partner compete together as a side, with each of you playing your own ball, and your side’s score for a hole is the lower score of the two of you on that hole.”

This format is also known by other names, such as low ball or best ball.

Next time you watch the Ryder Cup or Solheim Cup, you’ll be an expert.