Defender: The golf game for threes (and *not* three-putts) 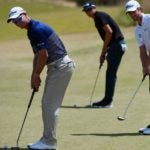 Defender is the perfect golf game for three players (and not for three-putters).

What’s your average golf experience like? Are you a battler, fighting every hole tooth and nail to post the lowest possible score? A grinder, earning — not finding — birdies and pars wherever possible? A bomber, blasting shots over trees, rivers and mountains, shank and wayward shot be damned? Or how about a tactician, attacking courses in pursuit of the lowest possible score?

Your answer to the above question informs whether you should participate in this week’s golf gambling game, Defender. This three-person golf game requires persistence, luck, and an unquenchable obsession with outscoring your playing partners. If you’re a grinder or a tactician, this game could set up perfectly for you. If you’re a bomber or battler, make sure your playing partners are too before participating. Here’s how it works.

Defender is a three-person game in which the players break into two rotating teams. On every hole, two players face off against one player (called the “defender”) with the hope of scoring lower than the defender. Based on the outcome of each hole, players are awarded points. At the end of the round, the winner is the player with the most points.

1. Pick Your Rotation: Before your group tees off, pick the rotation with which each player will be the defender. Traditionally, golfers will play with the defender in sequential order (A-B-C-A-B-C), but groups are welcome to adjust the order as they see fit to the difficulty or routing of a course. From here, the remaining two non-defending players form a team for the hole.

In Defender, it pays to be trailing closely heading down the stretch. After the 16th hole, tally your scores. Those who are trailing each get one final opportunity as the defender. It’s the leader’s job on the final two holes to keep the defender from making up ground.

3. Money: As with other golf gambling games, points are generally associated with a specific dollar value. In Defender, points can be worth anywhere from $1-10. While it’s easier for accounting purposes to play for $1 per point, we recommend upping the price of each point to at least $2 per point due to the low-scoring nature of the game.

4. The Catch: There’s no catch to Defender, but it should be noted that scores hold an incredibly important value to this game. Mentally tough golfers will always find themselves in position to accrue points, while those who struggle with the distance between their ears will find point values slipping away.

5. Alternatives: There’s an alternative scoring method to Defender in which those who lose the hole while defending lose points. While this muddies scoring and makes things difficult, it’s a great way to add an extra dose of drama to the game. If you’d like to play this way, when the defender loses a hole, subtract one point from their score in addition to giving one point to each of the winners. All other scoring remains the same.