The KPMG Women’s PGA Championship is all-world, even in a global pandemic 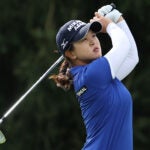 NEWTOWN SQUARE, Pa. — The third round of the third major of the GWB season is in the books, here at the KPMG Women’s PGA Championship, at fabulous Aronimink.

You’ve heard of Doctors without Borders? It’s a division.

OK, no — it’s not. Golfers without Borders is not a real thing at all. But it could be and should be.

With all due respect to the historic L in LPGA, the band of elite golfers who travel the globe in search of birdies and prize money does not need a gender reference in its title. What it needs is the attention it deserves.

The leader by two through 54 holes, Sei Young Kim, is Korean. Kim is looking for her 11th LPGA title.

Here are some of the others in the top-10:

Bianca Pagdanganan, from the Philippines;

And, straight outta Vegas, Ms. Danielle Kang her own self.

This is how they do it, etc.

This is how they do it every week.

If you haven’t already, now is as good a time as any to stand up and do the rhythmic Hoosiers slow-cap thing, in appreciation of what the best women golfers in the world have accomplished this year. In Florida. In Australia. In Ohio. In Scotland. In Arkansas and California. And now in Pennsylvania.

If you follow the PGA Tour, you of course know that one day in mid-March — Friday the 13th, to be specific — was a day of reckoning for the Tour, for its players and fans and support staff and officials. That was supposed to be the day for the second round of the Players Championship, at TPC Sawgrass. At first, it was going to be business as usual. Then, in deference to the pandemic, it was going to be a round played without fans. And in the end, in following the NBA’s lead, it was a day without golf at all.

The Tour was shutting down. The Tour’s commissioner, Jay Monahan, made the announcement. He looked like he hadn’t slept in a week. Rory McIlroy said, “It’ll get worse before it gets better.”

Mike Whan, the LPGA commissioner, had been with Monahan earlier that week. The two commissioners, along with 15 or so other people, had met Wednesday morning to vote on World Golf Hall of Fame candidates. It seemed like business as usual, but Whan knew it was not. He was both ahead of the curve and behind, as he acknowledged with admirable candor in an interview on Saturday.

“I drove home [to Orlando] from Ponte Vedra on Wednesday night, and we had a crisis-call phone meeting about what to do,” Whan said at Aronimink. The club’s grand clubhouse was behind him, an open-air scoring tent was beside him, and golfers were plying their trade on the hilly Donald Ross course behind it.

Whan’s meeting continued at the LPGA headquarters, off I-95 in greater Daytona Beach, on that Thursday. “This is kind of embarrassing to admit,” Whan said in the interview. “We had a tournament scheduled for the following week, in Arizona. We had 19 people in the room. Eighteen of them thought we should not play. I said we should. I was the only one saying go. They were playing minor-league baseball. One person said, `I know what you want us to say, but we can’t say it.’ If you get in a situation like that and you find out you don’t have people you can lean on, it’s too late. If you find you can, you get out of the way.”

He’s an interesting guy. He got out of the way. The Arizona tournament was canceled, along with five other U.S. events.

Much has been made about Donald Trump’s Feb. 7 revelation to Bob Woodward, that he knew then how serious the Covid-19 virus could be. Well, Mike Whan knew, too. The whole world did, or could have, had it been paying more attention to the LPGA schedule.

In early February, Whan was in Australia for two consecutive LPGA events. From Australia, the LPGA was going to Thailand, Singapore and China, for three events in three weeks. All three events were canceled, because Covid-19 was spreading and killing people. Very few people were talking about the pandemic publicly in the United States.

So Whan understood how serious the virus was, in late winter. But what he didn’t understand was how quickly it could and would upend lives beyond Asia and China.

He said he has learned far more from his globalist players this year than they learned from him. “I’m hyper – I do things fast,” he said. “Many of the players said to me, `Go slow here. Be safe.’” He had teachable moments, one after another, from players from a dozen or so countries, some of whom are half his age. He’s 55.

This KPMG Women’s PGA Championship, run in concert with the PGA of America, was originally scheduled for late June. In early April, Whan announced a schedule that would have the PGA being played in mid-October. Or so he hoped.

“It was more than six months away,” Whan said. In other words, he couldn’t really know. “These days, you can barely plan two weeks,” he said. As he explained, Scotland has one set of protocols. Ohio has another. France has another. The whole year has been one long, painful juggling act, Whan said, “the worst of my 55 years.”

And yet a wonderful, global golf tournament was going on behind him. On Sunday, a winner will hoist a trophy.

And in mid-December, the U.S. Open will be played at Champions Golf Club. Whan was asked if there will be fans there.

Why would he? It’s two months away! Who can predict anything these days?

But the commissioner can name you 100 or so players who will be happy to gather there, and the dozen or so countries they will represent. Mark this down if you wish: From Dec. 10 to Dec. 13, the fourth and last major of this peculiar GWB season will be held.

And on Sunday, Oct. 11, the fourth round of the third major will be played, here at Aronimink. Chances are good that the winner will speak more than one language. That’s pretty common, on this global tour.