Brooke Henderson, Lexi Thompson contending at ANA in their own one-of-a-kind ways 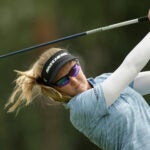 Brooke Henderson hits her tee shot on the 16th hole at the ANA Inspiration on Saturday.

With a Saturday 65 – the low round of the day – Henderson has roared into a share of the lead at 12-under, alongside Nelly Korda, who overcame a rough front nine with three birdies down the stretch. Thompson is two shots back, setting up a Sunday shootout with three of the LPGA’s biggest stars. Would-be spoilers include Stacy Lewis (8-under) and Danielle Kang (7-under). But for all the starpower on the leaderboard, Brooke and Lexi will be the most compelling protagonists, in part because of their differences. They are fire and ice; Henderson burns so hot, “it can occasionally bring her down because she wants it so badly,” says her sister/caddie, Brittany. Thompson, perhaps because she was in a glaring spotlight at such a young age, gives away almost nothing on the course, offering the same tight smile seemingly irrespective of how any given shot turns out. She often speaks in Zen koans: “You can’t control anything else but your emotions and your game, so that’s really all you have to focus on.”

Perhaps the biggest difference between Henderson, 23, and Thompson, 25, is that the former seems so comfortable in her skin while the latter is still struggling to find herself. Brooke is Canada nice, God-fearing and as sweet as maple syrup. “Sometimes you wonder if anyone can be so down-to-earth and polite and friendly,” Brittany Lincicome says. “She’s just a really good person. She seems happiest when she’s with her parents and her sister. You never see Brit or Brooke without seeing the other one. I’d kill my caddie if we spent that much time together.”

Brittany Henderson, six years the elder, was a terrific player in her own right, earning a spot in Coastal Carolina’s Hall of Fame. Trying to keep up with her big sis, Brooke learned to swing hard, which has led to the most awe-inspiring action this side of the young John Daly. She was 12 the first time she beat Brittany, and as a 14 year-old amateur, Brooke won a pro event on the Canadian Women’s Open. “I was kind of in shock,” Brittany says. “It was unbelievable that she got so good so fast. But it was great because we could keep pushing each other.”

Brittany chased the dream on the Symetra Tour but could never shake an aching homesickness. “It was pretty lonely,” she says. “It was a grind and a hard life when you’re out by yourself traveling around. When Brooke earned her card, it felt right to go out together and do it that way. It was a lot more fun being on tour together because we’ve always been best friends.”

Brooke was only 17 when she won her first LPGA event, and the following season she bagged a major championship, the Women’s PGA Championship, in a thrilling playoff versus then-number one Lydia Ko. Seven more victories have followed as Henderson has become the LPGA’s preeminent bomb-and-gouger, hitting driver on pretty much every hole. Even at Mission Hills, with its skinny fairways and grabby rough, Henderson is launching a dozen drivers a round, eschewing it on the 6th and 10th holes only because she runs out of fairway. (On Saturday, she played a trademark driver-off-the-deck on the par-5 9th hole, setting up an easy birdie.)

On Sunday, Henderson has a chance to answer two weighty questions: Can such a hyper-aggressive style succeed on the penal setups of the major championships, and can this sweetheart control the fire inside? “It’s definitely a journey,” she said of her on-course temper. “I think it’s a little bit back and forth every single week. Definitely trying to be a little bit more patient out on the course, maybe not be quite as hard on myself. But definitely try to always push forward and try to be a little bit better and make birdies.”

Thompson’s challenges are also metaphysical. Since turning pro at 15, she has had a complicated relationship with the game that has brought her fame and fortune. In 2018, she withdrew from the Women’s British Open and took a sabbatical from the tour to focus on her mental health, writing in an Instagram post, “I have not truly felt like myself for quite some time,”

Says Stacy Lewis, a low-key mentor, “She missed out on a lot of life experiences turning pro so early. Those are important years for your development. But I’ve seen some positive changes lately. She’s finally doing stuff that is entirely her own, and I can see how happy that makes her. That has to translate to the golf course.”

Two weeks ago, Thompson reunited with Jim MacLean, her girlhood swing coach, who has helped her return to her natural ball flight, a tight draw, whereas other instructors tried to get her to play a fade. “I’m not fighting it anymore,” Thompson says, a little poignantly. This week, she also had a new caddie, new putter and new putting grip. Thompson recently parted ways with her career-long management agency and on the eve of the Dinah unveiled a new personal logo. These are all positive steps toward more self-determination, but the veterans on tour still fret a player who has grown up before their eyes.

“It blows my mind when she says she’s going to retire young because she has so much talent,” Lincicome says. “I know it hasn’t been easy for her. She lets things eat at her too much. She just needs to learn to roll with things and not take them to heart so much. She reads all the social media stuff, and that doesn’t help because she’s definitely gotten herself in some pickles. But she’s too good to let these things bog her down. She has so much talent. She needs to get out of her own way and play free.”

The Dinah Shore is the ultimate test for Thompson. When she won here in 2014, at 19, it seemed like the start of a new epoch. But it’s been nothing but heartbreak since then, including top-five finishes in three of the past four years. On Saturday, she hit 17 greens in regulation, but a cold putter kept her from going deep. Still, Thompson allowed herself to dream a little bit. “It would mean the world to me to win another major,” she said.

It’s not even about the trophy itself; the satisfaction would come from finally doing it her own way. Same goes for Henderson. “Brooke is always going to be Brooke,” her sister says. “She’s always true to herself.”

What makes major championship golf so compelling is that it’s an X-ray of the soul. The final round of this Dinah Shore figures to be even more revealing than usual.