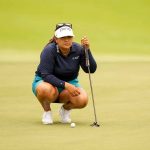 Lizette Salas leads the KPMG Women's PGA Championship after Round 1, and there is a bunched leaderboard giving chase.

JOHNS CREEK, Ga. — We are through 18 holes at the 2021 KPMG Women’s PGA Championship and there is plenty to get caught up on. It was a picturesque day at Atlanta Athletic Club with warm and humid temperatures on Thursday, and that theme should hold throughout the weekend. Expect more excitement as the tournament goes on.

Here are three things to know after the opening round.

Lizette Salas emerged from the morning wave as the surprise leader and that score held throughout the afternoon. Salas fired a five-under 67 to open the championship, carding a bogey-free round on the Highlands Course.

“It was definitely not easy,” Salas said. “We started with pretty wet conditions this morning, but the greens are rolling extremely pure. I had a really good warmup. I was really confident coming into this week, and I think my game really suits this golf course.”

Salas also used her post-round availability to open up on her mental health over the past year, admitting that she was “afraid” in 2020 and struggled to get her mind right. But thanks to a strong support system, she’s on the mend and has her mind on qualifying for the Solheim Cup this fall.

“I think we’re on an upward trend, and golf is a lot more fun right now,” she said. “We’re just looking forward to that Solheim Cup in a few months.”

If Salas can put together three more rounds of solid golf in Atlanta, that goal will become much more attainable.

Salas leads the field with Charley Hull one shot back after 18 holes, but behind the two front runners, the leaderboard is packed.

There are 22 players within three shots of the lead, and there is plenty of talent in that group. Among those two under or better after the first round are Nelly and Jessica Korda, Patty Tavatanakit, Ariya Jutanugarn, Maria Fassi, Gerina Piller and Jeongeun Lee6.

That group will likely thin out as the weekend goes on, but after Round 1, it’s truly a wide-open race.

Sei Young Kim was unflappable at last year’s Women’s PGA Championship, however she couldn’t summon the good vibes from last fall during the opening round at Atlanta Athletic Club. Kim fired a four-over 76 in Round 1 and will have plenty of work to do tomorrow to survive the cut.

Kim’s day got off to a solid start on Thursday as she was one under through seven holes, but the middle of the course proved to be her undoing. She played the stretch of Nos. 8-13 in seven over — including back-to-back doubles on 8 and 9 — and had to birdie 14 and 17 just to get back to four over.

If Kim wants to replicate fellow countrywoman Inbee Park’s feat of a successful title defense, she’ll have to minimize the big numbers on the card tomorrow and get back on the right side of the cut line.