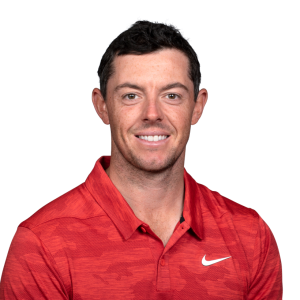 Winner of PGA Championship or U.S. Open during the past five seasons. (Exempt through September 30, 2019)

McIlroy grew up in Holywood, Northern Ireland and learned golf through his father, Gerry, a former scratch handicap golfer. McIlroy was taken to the driving range aged 18 months, immediately fell in love with the game and joined Holywood Golf Club at an unprecedented age of 7. His parents, Rosie and Gerry, worked extreme hours to support their son’s international junior and amateur golf career. Rosie took extra shifts at a local 3M plant, while Gerry worked 90-hour work weeks. It seemingly paid off when McIlroy won the silver medal for low amateur at the 2007 Open Championship at Carnoustie.

McIlroy was engaged to women's tennis star Caroline Wozniacki following a romantic proposal on Sydney Harbour in Australia on New Year's Eve in 2013. They were scheduled to marry in New York in 2014, but in May of that year McIlroy called off the engagement only days after the couple had sent out wedding invitations. In various interviews, Danish glamor Wozniacki said McIlroy ended their engagement over a 10-minute phone call. Coincidentally, McIlroy won the European Tour's prestigious BMW PGA Championship at Wentworth days after news of the split surfaced, then went on a tear – winning the Open Championship, WGC-Bridgestone and PGA Championship in the space of two months.

McIlroy has previously faced criticism from many golf pundits, including Brandel Chamblee, for a fitness regime some believed was going too far. Starting in 2010, McIlroy was reportedly working out five times a week for 90 minutes at a time. He added 20 pounds of muscle mass, while dropping his bodyfat percentage from 24 percent to 10. With his ripped physique, McIlroy was the first golfer to appear on the cover of Men's Health magazine. Critics such as Chamblee suggested excess training would leave McIlroy vulnerable to injuries similar to Tiger Woods.

McIlroy was engaged in a legal battle with former management company, Horizon, which settled in 2015 when McIlroy paid the Dublin agency almost $26 million. McIlroy originally sued Horizon, when he sought to terminate a "limiting" contract signed between the two parties in 2011. Horizon then counter-sued McIlroy for breach of contract and damages. McIlroy split with Horizon in 2013 to form his own management company, Rory McIlroy Inc.

McIlroy started dating former PGA of America employee Erica Stoll in 2015 and the pair were reportedly engaged in December 2015 while on holiday in Paris. The couple married in April 2017 at a lavish ceremony at Ashford Castle in County Mayo, Ireland. McIlroy bought, and moved into, a Jupiter mansion previously owned by Ernie Els after selling his Palm Beach Gardens home for $12.9 million. In January 2019, McIlroy faced controversy for admitting he may forfeit his European Tour membership in favor of focusing on the PGA Tour – admitting that with an American wife and a Florida base, his life and career were transitioning to the U.S.

Like many European golfers, McIlroy is a huge soccer fan and keen supporter of Manchester United. He was jeered by fans in his victory speech at the 2014 Open Championship when he told the Liverpool crowd he was a Red Devils fan.

McIlroy is a music lover and is a close friend of pop superstar Niall Horan. Horan regularly attends McIlroy's PGA Tour events and has caddied for McIlroy at the par-3 contest at the Masters.

McIlroy is a known automobile enthusiast, having once purchased a Ferrari F12 from Ian Poulter, while he has also been seen driving such luxury fast cars as a Ferrari F430, Lamborghini Aventador and a Bugatti Veyron.

The Latest News on Rory McIlroy