#AskAlan mailbag: Will Bryson DeChambeau overpower Augusta at the 2020 Masters? 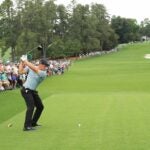 A noticeably slimmer Bryson DeChambeau hits a drive at Augusta National during the 2019 Masters.

In this installment of the #AskAlan mailbag, GOLF senior writer Alan Shipnuck answers your questions about Bryson DeChambeau’s chances at the 2020 Masters, Phil’s fading U.S. Open quest and much more.

Do you feel DJ and Bryson have sent a loud and clear message to their BFF Brooksie? — @BobbyTeeitup

And how! I’m all for a little trash-talking, but maybe Koepka shouldn’t have poked the bears during the worst season of his career. There’s no arguing with Brooks’ success in the major championships, but while his body breaks down both Dustin and Bryson remain week-in-and-week-out forces, another reminder that even in the best of times Koepka has never summoned that level of sustained intensity.

Four majors will get Brooks a spot in the Hall of Fame, but would Dustin trade all his wins and loot for what Koepka has achieved? I’m not so sure. And who is likely to achieve more over the next decade, Brooks or Bryson? My vote goes to the guy with the maniacal work ethic and insatiable obsession with improvement.

I’ve been on the U.S. Open odyssey with Phil for nearly 3 decades. He’ll be at other Opens when he wins the U.S. Senior Open, but this is a sad milestone. Your thoughts? — @david_troyan

Yes, it is rather glum that Mickelson hasn’t contended again since Merion. Against all odds, I expected one last hurrah, either at Pebble last year or Shinnecock the summer before. It doesn’t feel right for Phil to go out with a bunch of milquetoast performances but, hey, you can’t say he didn’t have his chances over the years. And Mickelson’s inability to win the one tournament he wanted the most is a useful fable for our time.

When does Justin Thomas start to get some heat for being so talented, but having a pretty weak record in the majors minus the 2017 PGA? — @War_Eagle1991

It’s definitely going to start getting a bit toastier after Winged Foot; his tie for 8th is only the second time he’s top-10’d in a major since Quail Hollow. Obviously JT has the all-around game to succeed on any course or setup, so you have to figure he’s getting in his own way by wanting the majors too much. At 27, he has plenty of time to figure it out.

It seems impossible, even as Rory’s uninspired play in the major championships has become a full-blown crisis. At the very least you’d expect him to go out on one of these Sundays an hour before the leaders and freewheel his way to a 63 and win one sitting in the clubhouse. But time is not on McIlroy’s side.

One stat that has always interested me is the time span between a great player’s first and last major win. It tends to be more compressed than you’d expect. Ben Hogan won 9 in seven years; Tom Watson took 8 in eight years; Arnold Palmer took 7 in six; Nick Faldo 6 in nine; Seve and Phil 5 in nine. It’s now been more than nine years since McIlroy, 31, won his first major. Maybe he will enjoy a big second act to his career and be an outlier like Els (18 years from first to last!) or Ray Floyd (17). But to do that he’s going to have to find a renewed passion for the game and the grind.

That ball obviously had a much better chance of being found if the grounds were crawling with fans, but even pre-Covid balls have gone missing on Tour, and that was with much shorter rough than Winged Foot’s. As for your regular game, that sounds eminently reasonable. When I lived in New York I got “leaf-ruled” to death by unscrupulous playing partners.

On paper the next 3 Ryder Cups are ours with the youngins carrying the load. Bryson, Wolff, Morikawa, Xander, Berger, English, Finau, JT, DJ, Cantlay, Webb and Champ. — @MarkHel88720875

Amazing that this list doesn’t include former alpha Koepka, one-time Capt. America Patrick Reed and Jordan Spieth, who owns almost as many major championship victories as the dozen players you listed. A big reason why I wrote my infamous column forecasting a decade+ of U.S. Ryder Cup dominance was the awesome young firepower of the Americans, which continues to emerge as the core of the European team (minus Rory) is approaching or have reached their 40s and begun to fade away. (That’s Rose, Stenson, Garcia, Poulter, Molinari and Westwood, for those keeping score at home.)

So, while I love your thinking, we all know that talent alone isn’t enough. The Americans have been consistently out-captained and their chemistry has varied from awkward to combative. Hopefully at least the latter changes with all the fresh faces.

Isn’t time they do something about the rules with drivers? I still don’t get why they outlawed V-grooves in wedges yet allow 460 cc drivers with all that distance engineering. And don’t say it’s for the amateurs. — @PierreLePeww

It’s for the amateurs. But I agree this could be one of the simplest fixes as the modern professional game continues to overwhelm our ancient playing fields. Let everyday golfers keep their toasters-on-a-stick but reduce the maximum head size on Tour to 300 cc or even 250. When the pros catch it on the sweet spot we’ll still get to enjoy awe-inspiring distance, but with a much smaller sweet spot, misses will become much more common and costly. In the old days, choosing to hit driver was risky because mishits were a real thing. Now, driver is the easiest club for pros to hit, and they can swing away with impunity. Cut the clubhead size in half for them and things get a lot more interesting.

David Edel doesn’t get any credit for being the one who build Bryson’s first set of single-length clubs. That was quite the process from start to finish. Why hasn’t the single length concept done better? — @TheGhostofhogan

Well, I texted Edel congratulations on winning the U.S. Open because he played a huge part in Bryson’s development. But you’re right, as DeChambeau has gone all-in with Cobra, the ground-breaking single-length sets Edel made have been somewhat forgotten. They were my first set of single-lengths, and I loved the care and craftsmanship that went into them. I’ve now being playing single-length for four years and can’t imagine I’ll ever go back; I’ve hit more good 4- and 5-irons than the rest of my golfing life combined.

For someone like me who rarely goes to the driving range, it makes the game so much simpler to have every club the same length, same weight and have each clubhead look the same. If I do hit balls, or before going out to play, I can literally grab any club because they all feel identical! (Obviously the lofts are different but that’s it.) Many playing partners have quizzed me about single-length and they all seem to accept the logic, but I don’t know any who have made the switch. I guess it’s a combination of inertia and reluctance to embrace something so different. Maybe Bryson’s breakthrough will finally open some minds.

Who and what can stop Bryson? — @Swingtheclubken

Obviously there is concern about how Bryson’s body will hold up in the long term — his Achilles tendons and knees and elbows and the discs in his back and neck are suddenly dealing with a lot more weight and torque. But as for other distractions, I don’t see it. Last year, when I was hanging out with Bryson for a GOLF Magazine cover story, I asked about his then-girlfriend. He said they had recently broken up. When they were hanging out she’d catch him staring off to space and would ask, ‘Honey, what are you thinking about?’ The answer was always the same: golf.

Alan, with one major under his belt, will this performance propel Bryson to overpower the field at The Masters 2020? — @forearmshivers

Certainly this applies to a few other bombers like Matt Wolff, Cam Champ, and Bubba, but Bryson has shown himself to be the most ruthlessly efficient at executing this overpowering style of play. Sad to say that Augusta National has become laughably short for the modern game. Of course, every other course on the planet has, too.

Bryson DeChambeau says that prior to the Masters he aims to put on another 10lbs and might be using a 48 inch driver on the hallowed turf at Augusta National. How might Fred Ridley respond to this in terms of the way in which the course is set up, do you think? — @TheGolfDivoTee

No doubt the Sub-Air will be humming. Firm greens remain the best defense, and especially at Augusta National. But it’s an outdoor game and if there’s rain — a distinct possibility in November — there is only so much that can be done to dry out the course. The green jackets could go full on USGA-at-Merion and concoct a series of ridiculous pin placements, but Ridley is a purist and he doesn’t want a bunch of goofy four-putts in a futile attempt to protect par. The best thing Augusta National could do is shave down the ill-conceived rough so drives run into trouble instead of being stopped short of the trees and water hazards.

If boom and bang succeeds next month is there an Augusta Tournament Ball for 2021? “We look forward to welcoming you to Augusta National and here’s your ball supply for the week” — @TimAggettsport

I sincerely hope not. That’d be like raising the rims to 11 feet just for the NBA Finals. Players spend years/decades perfecting their games and equipment, and now they have to change everything at the most important tournament of the year? That would be tacky. The green jackets don’t want anything that might besmirch their tournament and the debate/complaining about a dumbed-down ball would overshadow the Masters itself.

Forget Bryson for a minute. Last week I played in a group where one guy had an ace and an albatross in the span of four holes. I even wrote about it. Would you sell your soul to hit just one of those shots? — @GreggDewalt

You mean what’s left of my soul? Obviously.