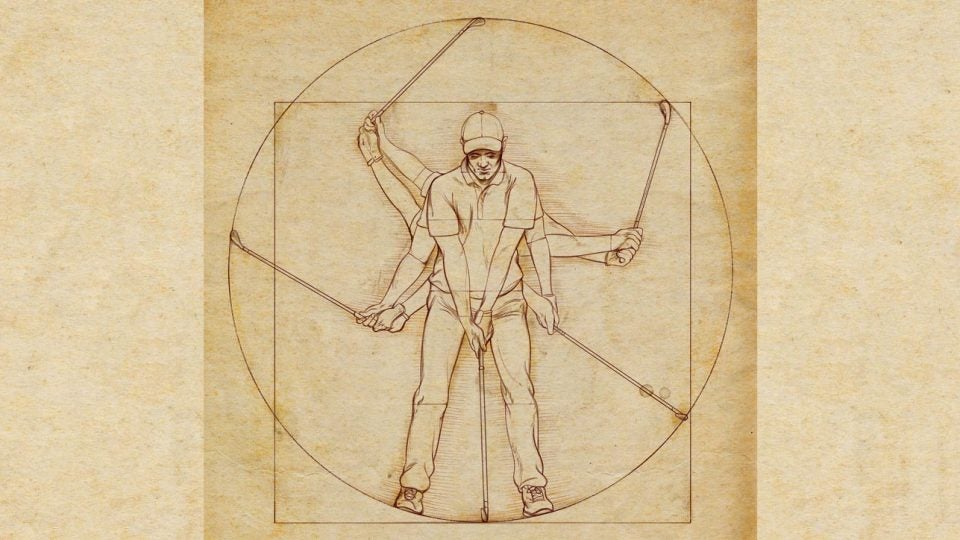 The goal of single-length irons is to be able to use one swing with all of your clubs.
Illustration by Andrew Archer

One of the most important developments in the recent history of golf club technology began with a single sentence buried in a cryptic tome. Homer Kelley’s 1969 book, The Golfing Machine—its pages bursting with insightful and highly technical swing treatises—has long thrilled and baffled readers. When he was 15, Bryson DeChambeau borrowed a well-thumbed copy from his swing coach Mike Schy. “Mind blown,” says DeChambeau. Chapter 10, section 7 covers what Kelley termed “customized” swing planes. With his idiosyncratic punctuation, Kelley wrote about a Zero Shift swing: “…one Basic Plane Angle is to be used throughout the stroke without ‘a Variation’—that is, No Shift.” Those 18 words raced through young Bryson’s mind for days. Was it really possible to be on the same plane with clubs as different as a sand wedge and a 3-iron? 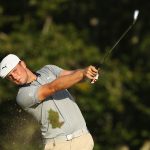 DeChambeau spent a summer experimenting and glumly concluded that, in fact, he had 13 different planes, owing to the varying length of each club. Having been raised as a golfer to think untraditionally, DeChambeau came up with a solution that seemed blindingly obvious to him: Make every iron the same length with the same weight, the same shaft flex and the same lie angle (72°), allowing the exact same swing plane to be repeated over and over. (Woods and hybrids would largely be left alone, at least for the time being.)

Schy was supportive of the experiment, so a set of old clubs was chopped up in the name of science. Into some old Nike VR heads they inserted 37.5-inch shafts, which is the length of a traditional 6-iron. In any set, the heads of the wedges are heavier than those of the slender long irons. After running a series of calculations in the supercomputer that doubles as his brain, DeChambeau determined that an ideal uniform weight for the heads in a single-length set would be 282 grams. Lead tape was used to make the heads on the longer irons heavier; the extra mass made up for a shorter swing arc. To shed weight on the wedges, holes were drilled in the back of the head and metal was gouged out of the backline of the sole; losing that mass was counteracted by the increased swing speed that came with the longer shaft.

When the work was complete, DeChambeau raced to the first fairway at Dragonfly Golf Course, the humble public track he grew up haunting in Madera, Calif. From 160 yards, he selected an 8-iron. The club felt a little long and light but not overly so. He hit a lovely draw pin-high. On the second hole he dropped a ball 210 yards from the flag and reached for his reconstituted 5-iron. This was the moment of truth: If the shorter, heavier long irons worked, his underlying theory of a single-length set was sound. 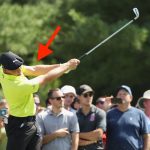 You may also like Bryson DeChambeau gave me a lesson and shared a swing ‘secret.’ Here’s how it can help you.

DeChambeau flushed the shot. “It was in the air for what felt like forever,” he says. The suspense was awful. Was the ball going to be 20 yards short? Twenty yards long? It landed three feet from the flag.

Less than a decade later, single-length irons are a rapidly growing part of the equipment market. DeChambeau didn’t invent the concept—Tommy Armour Golf tried (and failed spectacularly) to sell a version in the 1980s—but he is now the public face of a fundamentally different way of playing the game. He has had some help along the way. While an undergrad at SMU, DeChambeau became close to David Edel, a fellow obsessive whose Texas-based boutique company has long turned out some of the most gorgeous (and expensive) putters and irons on the market. Edel spent years perfecting the single-length clubs that DeChambeau used to win the 2015 U.S. Amateur and NCAA title, going through three dozen handcrafted sets. From the beginning, Edel could feel a revolution brewing that transcended DeChambeau’s idiosyncrasies.

“One of the hardest things for amateurs is to consistently produce a good strike with their irons,” says Edel. “On every swing the club feels different, because it is. With a wedge you have to squat down and stand close to the ball, and it’s a short, heavy club. With a long iron you’re more upright, the ball is farther away, and the club is long and light. No wonder people struggle! Eliminating all of those variables automatically makes the game easier. That is the holy grail of golf equipment, and we found it.” 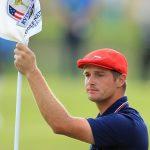 DeChambeau turned pro after a stellar showing at the 2016 Masters. Cobra Golf had won what its vice president of R & D, Tom Olsavsky, calls “the Bryson recruiting lottery,” but at the outset of his pro career DeChambeau still had Edel irons in his bag. DeChambeau and Edel are both strident and headstrong, and that spring they suffered a falling out that neither cares to discuss. The engineers at Cobra had already been fooling around with single-length sets, but suddenly they had a mandate to build one for their new star, who, naturally, was intimately involved in every detail. “Bryson brought so much knowledge to the process,” says Mike Yagley, Cobra’s senior director of innovation and AI. “We learned along with him.”

When DeChambeau claimed his first Tour win, at the John Deere Classic, in July 2017, he was wielding Cobra irons. A year and a half (and four more DeChambeau victories) later, Cobra has sold some 40,000 single-length sets worldwide, helping a small-scale company gain two more percentage points of market share in 2017 and move up to fourth in overall iron sales. Now Cobra is going all-in on its One Length line, with three different head designs and hybrids on the same shaft. (“They look like a toy, but they’re as long as all of our other hybrids,” says Olsavsky.) Importantly, Cobra has also rolled out an extensive fitting system and introduced a trial program in which consumers can test out a set of One Length clubs for two weeks for a mere $20. All of this is designed to help educate and entice golfers to think different, to borrow a handy marketing phrase. 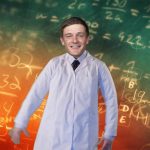 You may also like Drop Zone: Mexico — Is Bryson DeChambeau sneaky cool?!

Even without DeChambeau in the fold, Edel Golf remains committed to the single-length concept. It has over 100 fitting accounts across the country and a bespoke fitting system through Club Champion, and has also introduced a demo program in which the open-minded can have three irons at a time delivered to them to test, for $150. If Cobra is trying to reach every kind of golfer, Edel is more of a high-end niche product—its irons feature a smaller head with a thinner topline and unique Paderson shafts made of Kevlar. Each club sells for $245, more than double the most expensive Cobra model. “As the market gets bigger, there’s room for more variety,” says Edel. 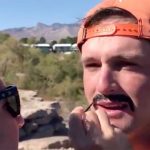 You may also like WATCH: Bryson DeChambeau dresses up as Rickie Fowler for Halloween, asks for autograph

It remains to be seen if an industry behemoth like Callaway will take the plunge. The biggest barrier to entry might be the simple fact that there is not enough Bryson to go around. Every Tour player endorses some kind of gear. They’re paid mercenaries, peddling hyperbole. DeChambeau is offering something much more rare: authentic enthusiasm. “I have zero doubt this is the best way to play golf,” he says. “Not just for me, but for everybody.”

The larger golf world is catching on.