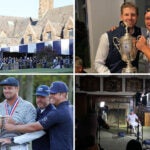 What does a newly-minted U.S. Open champ do after he wins?

MAMARONECK, N.Y. — After the dust settles from a U.S. Open horserace and the dusk settles over Winged Foot’s 18th green, what happens? How does that change in the Covid era, and how does it change when the tournament winner is Bryson DeChambeau?

On Saturday night, DeChambeau shared his plans for the evening, his secret sauce for final-round prep: Range, gym, steak, Fortnite. Four holes into Sunday’s final round, DeChambeau seized Matthew Wolff’s lead. By No. 10, the result began to feel inevitable. Media members are typically relegated to their keyboards in the minutes following the final putt, but I couldn’t help but wonder: How would his routine differ with a trophy in tow?

What follows is some version of the subsequent events as they unfolded.

The celebration for Team Bryson began while play was technically still going on. After DeChambeau’s triumphant par-saving fist pump at No. 18, Matthew Wolff still had to finish out a two-putt par. The timing was awkward, but it meant that DeChambeau took a moment to look around, to double-check his scorecard, to grin with relief after grinding all week.

When Wolff holed out, DeChambeau started off toward the scoring area — force of habit — but then turned to greet his crew. He fist-bumped his caddie, Tim Tucker, who gruffly expressed his congratulations. His manager, Connor Olson. His agent, Brett Falkoff. His longtime swing coach, Mike Schy, and his more recent swing coach, Chris Como.

Zach Johnson was the lone PGA Tour player there; he gave DeChambeau’s entire crew enthusiastic fist-bumps, one by one.

DeChambeau disappeared into the adjacent building to sign his scorecard, and when he re-emerged there was a surprise: his parents, Jon and Jan, on a jumbo Cisco WebEx screen. He saw them before they saw him, which meant by the time the DeChambeaus saw their son, he was already tearing up, overcome with emotion.

“I love you guys so much,” he said, several times. “Y’all are the best — thank you for sacrificing everything for me, and for this.” It was a sweet moment.

The trophy ceremony awaited. Bryson strode back through an iconic Winged Foot archway and to his winner’s podium, socially distanced from USGA CEO Mike Davis on one side and low amateur John Pak on the other. After Pak presented himself with low am medal, DeChambeau presented himself with the U.S. Open trophy; he gave it a big kiss.

Golf Channel’s Steve Sands, in a trim navy suit, swooped in for a round of questioning. He asked about DeChambeau’s transformation, but DeChambeau followed his own script — he thanked his sponsors first and then his team, with particular care for Chris Como:

“He has done so many great things for me this past year, going through this body transformation, changing my whole golf swing, inspiring me to hit it farther, as far as I can, and he ultimately has allowed me to have the confidence to go forward with that thought process, go forward and attack it and not be fearful of it and try and gain speed and try and press the status quo.

“So I’d be remiss to not say thank you for everything you’ve done, Chris. It’s been an amazing journey, and to many more for sure.”

DeChambeau was feeling thankful. He thanked Pak for asking his perspective (“that was pretty special”) and he thanked the USGA for a terrific tournament, and he thanked the Winged Foot staff and grounds crew, particularly those who kept the lights on for his late-night range sessions.

But that was still just the beginning. When you win a major championship, you’re asked about 100 times what it all means before you’re even allowed a deep breath to think about what it might mean. DeChambeau posed for photos with the trophy with the clubhouse, and then he hammed it up for some sunset shots by the 18th green, and then took a few with various members of his team.

Next was the winner’s press conference, open to the media at large. Typically, a major winner’s presser is held in the expanses of the media center’s interview room, but with all interviews happening outside various masked reporters took their turn asking from stand-up microphones, and DeChambeau played all the hits. He expressed his pride in the process (“So many times I relied on science, and it worked every single time”), his next equipment experiment (“I’m going to be trying a 48-inch driver”), his putting gains (“I was dead last when I came out on Tour… I’m inside the top 10 now”), his weight gains (“6’1, 230-235”) and how he’d describe his win to the USGA (“He’s hitting it forever. That’s why he won. I mean, it was a tremendous advantage this week.”).

DeChambeau has always been bigger than you’d think in person, but now he’s much more that way. Sure, the announcers get carried away talking about him looking like a linebacker, but it’s not so unreasonable — the average NFL linebacker is 6’2, 245, just a shade thicker (and likely slightly quicker). DeChambeau sipped on an Orgain protein shake as he answered questions. A USGA staffer asked if he wanted food and his agent ordered a steak on his behalf: filet, medium, salt and pepper.

But first, more interviews. A hit on SiriusXM. A message for Rolex. A stop-off with Barstool. The car wash!

The herd headed inside Winged Foot’s clubhouse, which is one moat away from a castle and particularly dramatic at night. One large room had been set aside as a dramatic studio; that’s where DeChambeau did a series of sitdowns: Golf Channel. The Today Show. CNN. He told some stories I’d heard before, but they had renewed meaning in this context, particularly one: When his father was battling through dialysis, they turned to Finding Nemo for inspiration. “Just keep swimming” became a family mantra.

I turned to Olson midway through and remarked how I was struck by the sheer volume of it all. So many stops! So many questions! So many reactions! He was nonplussed.

“It’s pretty much like this whenever he wins,” he said. Winning sounds tiring.

After one emotional moment, Olson swept in and called for a break. Time for some food. DeChambeau made it to Winged Foot’s bar and ordered a water; he’s not one for alcohol. His filet arrived, side of crispy potatoes, plus a supplemental slice of pizza from Sal’s, a Mamaroneck staple. He washed that down with another Orgain.

The giddiness had started to wear off, but if exhaustion was (understandably) setting in, it had the effect of settling DeChambeau down. For a golfer who is literally never satisfied, was this contentment?

His work still wasn’t done, but it was close: Two more hits, one for the USGA and the other for ESPN’s Scott van Pelt. It was 9 p.m. now, and it was finally time to celebrate.

The afterparty was at Trump National GC Westchester, in Briarcliff Manor, some 20 miles north of Winged Foot, DeChambeau has a close relationship with the Trump family and Trump Organization Executive Vice President Larry Glick; he’s one of several pros who sports the “Trump” logo on his golf bag and has played at several of their properties.

Eric Trump played the role of host and hype man, introducing DeChambeau like a conquering hero as he entered the grill room, trophy in hand. The two most famous men in the room made for quite the side-by-side: Eric, who’s 6’5 and lanky, next to Bryson, who’s 6’1 and not.

Tim Tucker, DeChambeau’s caddie, gave a rousing speech (“My guy played his butt off!”) and DeChambeau re-thanked his loyal squad, one by one, Brett and Chris and Tim and as the group — a small crew comprised mostly of friends and club members — roared in approval.

DeChambeau mingled with some of the guests. He snagged another Orgain — Olson always has them on hand — and ordered another filet, too. He even had some wine.

The Seahawks-Patriots game was on one television, but the bartender flipped the adjacent screen to Golf Channel, where a replay of the golf was coming on. Suddenly, there was Mike Tirico on the screen holding the trophy while DeChambeau clutched it in real life, and everybody cheered again.

It was a low-key gathering, as most are these days. There were congratulations, pictures, jokes, cocktails. DeChambeau kept repeating how happy he felt. With him, it’s usually pretty easy to tell.

Numbers dwindled as the evening wore on; DeChambeau’s grins turned into yawns. Eventually, he slipped out to sleep at a suite on property. He had an after-afterparty to attend: He was eager to show his gratitude to fans more directly. DeChambeau and the U.S. Open trophy headed off into the night to fire up a thank-you Twitch stream.