Inside Bryson DeChambeau’s Saturday-night range session at the U.S. Open 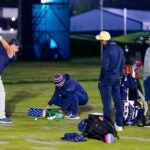 He’s on the range, here at Winged Foot. The sun has set, the moon has risen, the North Star is doing a little dance with her neighbors. And beneath it all, in all his distinctiveness, is Bryson DeChambeau, in second place in this 120th U.S. Open, hitting one 3-wood and one driver after another.

Where are they going?

He cannot say. Neither can his caddie, nor his swing coach, nor his agent. It’s black as ink above the tree line, on this converted fairway from the East Course. DeChambeau is under klieg lights, powered by a noisy and malodorous diesel generator rented from Home Depot.

The agent is wearing a ski cap. At one point, he wandered off base camp on an important errand, to retrieve some other clubs DeChambeau wanted to test.

The caddie is wearing a hoodie. At one point, he wandered off, in search of another plastic bucket of balls he found in the untended ball-distribution tent.

The teacher is wearing a windbreaker. He moves barely at all, shifting his position now and again just to see his sui generis pupil from another angle.

It’s about 55 degrees and the air is dry and still. DeChambeau is in the short-sleeved, skin-tight golf shirt he wore all through his long, afternoon round with Patrick Reed. DeChambeau shot 70, even par. He was in the last twosome on Saturday and he will be again on Sunday, starting the day two shots behind the leader, Matthew Wolff. DeChambeau, it can be said with certainty, does not need a ski hat or a hoodie or a windbreaker. From a distance of 30 feet you can see the sheen of perspiration on his drumstick forearms.

Needless to say, he’s the only player on the range, or on the property, for that matter. A state trooper with a sniffing dog is checking out the hedges by the clubhouse. A skeleton crew of cleaning staff is at work in the clubhouse. Reporters on deadline are typing in the press tent. DeChambeau is hitting ball after ball after ball.

Much has been said and written over the years about big athletes who get bigger. For purposes of this discussion, we will leave it at this: Bulking up can increase your capacity to do work, at least for a while. There are sprinters and baseball players and power lifters who will tell you that. Tiger Woods and Vijay Singh will tell you that.

DeChambeau’s capacity for work, if this Saturday night is any indication, is limitless. What others feel, he does not, or so it would appear on this evening. Brooks Koepka used to say about the same thing. He never felt any pain, he said. Now he’s on the DL.

After his round, and before he went to the range, DeChambeau did a quick TV interview. For a while, as he waited for the red light to go on, he stood, perfectly silent and still, with his chin down and his eyes closed. Where he was mentally, only he could say.

Later, still waiting, he made a series of phantom swings with his water bottle. Where he was mentally, only he could say.

A Golf Channel production person encouraged DeChambeau to stand closer to the mic, for when things went live. “I know,” DeChambeau said. He was out of his reverie.

Patrick Reed walked by DeChambeau, picked up an acorn off the ground, threw it at him. It begs the question: If an acorn struck DeChambeau anywhere on his 240-pound body while giving an interview, would he feel it?

And now 8:15 p.m. has come and gone. DeChambeau is walking off the range. His credential is in his front left pocket with its long lanyard beside his thigh. He passes two small buckets of balls. He can’t help himself. He stops and hits a few more. A wedge. A driver. Another.