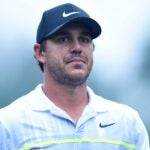 Brooks Koepka has not played in an event since last month's Wyndham Championship.

The U.S. Open will be played without one of the biggest stars in golf in the field.

Brooks Koepka announced in a Twitter post Wednesday afternoon that he has decided to withdraw from next week’s event at Winged Foot for health-related reasons.

“Unfortunately, I have decided to withdraw from next week’s U.S. Open,” the post said. “I’m looking forward to getting healthy and competing at 100% again very soon.”

This will be the first time since 2013 that Koepka misses the U.S. Open. In his previous three starts in the nation’s national championship, he’d earned two wins and a runner-up.

Koepka was last in action at last month’s Wyndham Championship, where he shot 72-70 for a disappointing missed cut. He withdrew from the following week’s Northern Trust, effectively ending his season.

“This is physical,” Koepka said at the Wyndham Championship. “I just physically can’t do it … My golf swing’s fine if I can physically do it.”

The four-time major winner had a disappointing 2019-20 campaign, a season after winning two majors and leading the PGA Tour money list. He revealed last October that he’d been playing through a left knee injury throughout the season and had surgery to correct the issue, but a fall at the CJ Cup reaggravated the injury and kept him out until February. But the turn to the new year did him no favors on the course.

Koepka registered just two top-10 finishes on the season and failed to find the winner’s circle for the first time since 2016. His defense of the PGA Championship title was particularly embarrassing for Koepka as he threw some pointed jabs at his former buddy Dustin Johnson on the eve of the final round. Koepka went on to fade out of contention, firing a disappointing 74 to fall into a tie for 29th.

After the event, Koepka reiterated that he still wasn’t physically sound, and attempted to walk back some of the PGA Championship comments that were perceived as disrespectful.