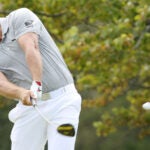 Bryson DeChambeau hits his drive on the 2nd hole at Winged Foot Golf Club on Sunday.

Bryson DeChambeau played the U.S. Open at Winged Foot Golf Club last week at 6-foot-1 and somewhere between 230 and 235 pounds. “Depending on if I’ve eaten steak or not,” he said. He popped his drives at an average of 325.6 yards per, sixth in the field. He was the only player to finish under par for the week, and he won by six shots for his first major championship.

He said Sunday after his victory that he wants to play the Masters, from Nov. 12-15, 10 to 15 pounds heavier. At the high end of that, he wants to put on about a quarter-pound a day over the next 52 days. After putting on about 40 over the past year.

“I think I can get to 245,” DeChambeau said. “It’s going to be a lot of working out. I don’t think it’s possible – it may be, I don’t know. It’s just I’ve gained so much so quickly in a year. They always say, when you work out, you gain your 30 pounds or whatever it is, and then after that, each year, you half it. So you can go 15. If you keep working out every day, you keep halving it. And then eventually there comes a point where you can’t gain much more. But I still feel like I can get up there if you work hard enough.”

DeChambeau averaged a PGA Tour-best 322.1 yards per drive during the recently ended season. The season before, he averaged 302.5, tied for 34th on Tour. In the two majors played over the past year, the PGA Championship last month and the U.S. Open, he’s finished tied for 4th and 1st, his second-highest and, obviously, his highest finishes as a pro.

“Well, length is going to be a big advantage there,” DeChambeau said. “I know that for a fact. It’s always an advantage pretty much anywhere.”

Added size should also help against any club subtraction.

In early February, the United States Golf Association and the R&A released the Distance Insights Report, a summary of what they believe to be golf’s distance problem. The report suggested that increased hitting distances are hurting the game, and while it did not give specific solutions, it did suggest such things as the potential for new conformance tests for clubs and balls, and a local rule that would allow courses to require limited-flight equipment.

But it’s tough to rein in athleticism, DeChambeau said.

“We’re always going to be trying to get fitter, stronger, more athletic, and Tiger inspired this whole generation to do this, and we’re going to keep going after it,” he said. “I don’t think it’s going to stop. Will they rein it back? I’m sure. I’m sure something might happen. But I don’t know what it will be. I just know that length is always going to be an advantage.”

A few minutes later, the press conference was over. A little while later, he ate dinner. Filet, medium, salt and pepper, with a side of crispy potatoes, along with a slice of pizza from Mamaroneck’s Sal’s, according to our Dylan Dethier.