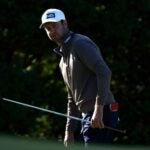 Harris English got off to a rough start in the fourth round of the U.S. Open.

Harris English hadn’t lost a ball all week in the legendarily juicy rough at Winged Foot West — not in a practice round and certainly not in a tournament round.

At least not through the first 54 holes.

On Sunday morning, he was at level par in the 120th U.S Open, tied for fourth and five shots behind the 21-year-old leader, Matthew Wolff.

English was in the hunt. Then, before he knew it, he was on the hunt.

On the 1st hole, a mean par-4 that works right to left, English — a 31-year-old two-time Tour winner and Sea Island, Ga. resident — tugged his drive toward the left rough. English saw it ricochet off the right side of a tree and back toward a mowed-down walkway. Eight, 10, maybe a dozen marshals and other assorted volunteers immediately descended on the scene. The search was on.

“I didn’t think anything of it,” English said later. He had assumed it would be an easy find. “Then we get up there, and everybody’s looking around and have no idea where it is.”

English joined the search party, dragging a foot through the rough in hopes of unearthing his orb. Bubba Watson, playing on an adjacent hole, spotted the commotion and graciously joined the effort.

A word about the Winged Foot rough: it’s lush and dense and gobbles up balls like a carnival game. About three weeks before the Open, I played 12 and a half holes on the West Course before a late-afternoon thunderstorm ended my round. Jason Gore, the former Tour winner and four-time Open participant — and still a hell of a player — was in my group. On the par-4 2nd hole he pushed his drive into the right rough. Our foursome, plus a couple of other hangers-on, had eyes on it, but alas, after a thorough search, we never recovered his ball.

On the par-4 9th, another player in our group, a lefty, hooked a tee shot into the right rough. After a few minutes of hunting, one of the caddies in our group found the ball, identifying it by its mark. The looper then spun around to alert his player that he had located it.

“Sorry, where?” the player said.

“Right here …” said the caddie, his voice trailing off as he embarrassingly resumed a second search to re-find the ball. “I’m telling you, it was right here.”

But back to our man English. Before he knew it, the three-minute search time permitted under the rules had expired. English scowled. No other way to say it: He was pissed. Tour pros at this level of the game aren’t accustomed to losing balls seemingly in plain sight — not in any event but certainly not in a major and most certainly not on the first swing of the final round of a major when they’re in contention.

“Such a weird start,” English said after his round. “I’ve never had that happen before, but you’ve got to kind of reset, restart.”

Quite literally in this case.

English solemnly returned to the 1st tee to, in essence, reboot his fourth round. Only instead of hitting his first shot, he would now be hitting his third. Imagine that: starting a U.S. Open round, on a course as unforgiving as this Tillinghast beast, two strokes in the hole. Good luck coming to peace with that.

Give English credit. More volatile players might have folded like a cheap lawn chair. But after blocking his second tee ball into the right rough — findable this time! — English toughed out a double-bogey. On the next hole, from a deep bunker in front of the green, he holed out for birdie. One-over through two? A commendable start given his, well, start. English made the turn at that same number. His back side was less fruitful — three bogeys and a birdie — producing a three-over 73, which was still two better than the fourth-round field scoring average.

English’s 283 was good for fourth place by himself. Give him back those two strokes and he leapfrogs Louis Oosthuizen into solo third. The difference in those two places in terms of payout? Nearly $250,000.

“I grinded out there,” English said. “Pretty happy with my performance, especially [given] the way it started. I could have mailed it in pretty quickly, but I didn’t do that. I knew I was still in it and still fighting.”

Lost ball or not, English was never going to put a scare into Bryson DeChambeau on what was a breezy, sun-splashed Sunday, not with the way the victor-in-the-making was manhandling the course. But English still had to feel chuffed about his resilience.

As for his now-fabled ball? If you ever make it to Winged Foot, keep an eye out for it down the left side of No. 1.