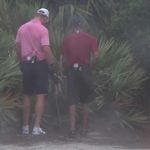 Peyton Manning and Tom Brady were both forced to head into the wilderness to find their first tee shots.

On the first tee of the Match II at Medalist Golf Club Sunday, both Tom Brady and Peyton Manning showed their nerves. After a lengthy introduction from Samuel L. Jackson, Brady and Manning each stepped up to the tee and promptly hit hooks into the wilderness.

First, to social media’s chagrin. Brady took a long, wristy swing and hooked his shot into a puddle.

Then, Manning stepped up to the tee and one-upped his former AFC foe. Peyton smashed his driver well into the trees and was forced to take an unplayable.

The quick, nervy swings certainly weren’t the start the pair of Hall of Fame quarterbacks had planned for their rounds. But fortunately for both, their mistakes did no harm. Phil and Tiger halved the 1st hole, giving their teammates some time to ease into the round.

Through three holes, Woods and Manning are 1 up.