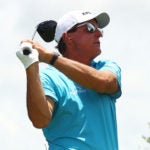 Phil Mickelson golf math can not be done on any calculator.

A couple hours before Sunday’s The Match: Champions for Charity at Medalist Golf Club, while standing next to his personalized cart and wearing aviator sunglasses, Mickelson described the formula it will take for him and partner Tom Brady to defeat Tiger Woods and Peyton Manning.

First, the first C, coffee. A drink Mickelson has committed to.

“Not just any coffee with sugar and crap, no,” Mickelson said on a video posted on his social media feeds. “It’s coffee for wellness with good stuff that gets your body to function right, your brain to function right.”

Then the second C, calves. A part of the body Mickelson has committed to.

“You couple that with calves, and you have exponential performance.”

The B, bombs. A part of the game Mickelson has committed to.

“A bomb is high and nasty.”

The HS, hellacious seeds. A bit new, so a bit further explanation.

“A hellacious seed is a screaming, low, hot runner, and into the wind. I’m going to need to hit some of those. Now Tiger likes to hit stingers, and those are cute. Hellacious seed is going by a stinger so fast, like you can’t even wave – like if you were to put your hand out the window, like it would blow your hand back so fast it would hurt; like you can’t even wave goodbye as you pass a stinger. Hellacious seeds are so hot and long.”

And finally the I and V. Mickelson defeated Woods in 2018 in the first Match. He believes the math adds up to another win.

“Intimidation and victory. And that is how Tom Brady and I are going to come home with, yet again, another belt from The Match. Let’s go.”