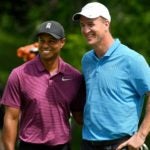 Peyton Manning played alongside Tiger Woods in the Pro-Am at the 2018 Memorial Tournament.

Peyton Manning is a household name in the United States because of his historic success on the football field, highlighted by two Super Bowl championships with two different teams. But this week, Manning will compete on live TV in a different sport, golf, when he joins Tiger Woods to face off against Tom Brady and Phil Mickelson in The Match: Champions for Charity.

When the star-studded match play event begins on Sunday, May 24, Manning will get to show off a golf game that is nothing to snuff at. Here’s a closer look at the NFL great’s performance on the course.

According to GHIN, the official handicap system in the United States, Manning currently holds a handicap index of 6.4. That’s better than most recreational golfers, and it suggests he is fully capable of breaking 80, though he doesn’t necessarily do it all the time.

A review of Manning’s recent rounds confirms as much and also reveals a remarkable level of consistency in his results. Though he has posted no official scores for 2020, Manning entered 20 scores between May and September of last year. The six rounds he recorded in the month of September range from 82 to 88. But that lone 88 is the highest score on his GHIN page. His best score was a 78 in August at Cherry Hills.

According to the USGA, Manning would have a course handicap of 9 at Medalist (though he won’t be getting that many shots for the match against Brady and Mickelson), which is higher than his normal index due to the Florida course’s difficult course and slope ratings (73.1/141).

What golf clubs does Peyton Manning belong to?

There are three golf clubs that we are certain Manning belongs to, although in reality he likely is a card-carrying member at several different clubs.

He has two official home clubs, Castle Pines Golf Club in Castle Rock, Colo., and Cherry Hills Country Club in Cherry Hills Village, Colo. Cherry Hills is perhaps best known as the site of Arnold Palmer’s 1960 U.S. Open victory, the only U.S. Open win in Arnie’s career. The club also hosted Opens in 1938 and 1978, with the 1941 and 1985 PGA Championships also being contested on the 1922 William Flynn design.

But one club in Manning’s roster stands above all others, one of the most sought-after memberships in all of golf. Back in 2016, the future NFL Hall-of-Famer was invited to join Augusta National Golf Club, home of the Masters. Brady may belong to The Country Club and Seminole, but he certainly can’t top Manning’s Augusta trump card.

While he may know a thing or two about Augusta’s devilish greens, Manning’s past performance at Medalist is a warning sign for the match. In a video previewing the event, he admitted that he once played Medalist with Woods, but he struggled so much that on the 18th tee he had to beg his playing partner for a replacement golf ball.

The Match: Champions for Charity will be televised live on Sunday, beginning at 3 p.m. ET on TNT.