How Peyton Manning wants to help your local golf course, a little at a time 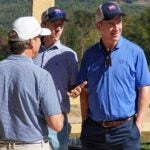 Peyton Manning and his brother Cooper at Sweetens Cove.

Peyton Manning remembers his first trip to Sweetens Cove. It began with a call from a tennis pro.

“Andy Roddick and I go back just from being professional athletes at the same time,” he remembered on this week’s Drop Zone. “So Andy called me and invited me out to South Pittsburg, Tenn., right near Chattanooga, and said, ‘Come play this golf course called Sweetens Cove with me.’

“I’d heard of Sweetens Cove, I spent time around Chattanooga, but I hadn’t played the course. And then I played it with him — and I just got it. It connected with me. It’s a nine-hole course, a public golf course, very inexpensive to play. There was an old shed for a clubhouse and there was just something really cool and magical about it.”

Roddick had an ulterior motive for inviting Manning out.

“Andy said, ‘Why don’t you come in with us and buy this golf course and be a part of something special?'”

It was an easy sell. The course had been a cult favorite for years; golfers made the pilgrimage to nine-hole paradise from all over the country. The tee sheet was filled. All the course required was some investment — and a new business plan — to ensure the experience lived up to the reputation. Manning was in.

“When we bought Sweetens Cove we wanted to keep it cool and unique, we didn’t want to change a lot about it. We added a bathroom, we thought that was pretty groundbreaking to add indoor plumbing. But we kept it special,” he said.

The new ownership group particularly appreciated one course tradition in particular. People would bring their own bottles of bourbon or whiskey and take a shot before they hit the opening tee shot. Some groups would leave their bottle for the next group. The tradition sparked an idea:

“Maybe we ought to start our own bourbon,” Manning remembers.

The initial run of Sweetens Cove Bourbon was a high-end, award-winning product made under the direction of Master Blender Marianne Eaves. It retailed for around $200. On April 1st, the group announced the release of a new product called Kennessee. The new bourbon retails for $60, making it more accessibly priced and opening up a world of cocktail possibilities.

Manning has been on the ground — and on the phone lines — trying to get the Sweetens brand off the ground. Manning went so far as to cold-call a bunch of liquor stores in an attempt to get them to stock the product.

“There are a lot of products out there, we’re a small startup, kind of like the golf course, just sort of building and spreading the word,” he said.

As it turned out, the attempt backfired. Manning’s calls to Indianapolis-area stores went unreturned. Manning said he waited the requisite three days to get a response before reaching out to some mutual friends.

“He’s like, ‘He thinks it’s a prank,'” Manning remembers his friend saying. “‘There’s no way Peyton Manning would be calling me, it’s a total prank.'”

Meanwhile, Manning was amazed to see how the little expenses added up around the golf course. Little improvements led to big-time costs. The experience left an impression. As a result the “Little Golf Course that Could” is hoping that proceeds from its new bourbon can help out a few other courses on the margins, too.

In an effort called the “Give-A-Little” program, Sweetens will dedicate $5 from each of the first 10,000 bottles sold. That money will go towards little projects at courses that need it.

“We’re going to try to help out golf courses with those little things. New turf mats with the driving range. A new bench. Paving the parking lot. Little projects that we dealt with a lot,” Manning said. “They need a little help and we’re excited that as part of the Kennessee launch some of the proceeds are going to go to helping out these golf courses in little ways.”

As for his golf game? Manning says that’s a work in progress, too. Dreams of retiring from football and becoming a scratch player haven’t yet come to fruition. Lately he’s been losing to Roddick, too.

“I think Andy has me right now. Something about that tennis forehand, he kinda can transfer that into his long iron game. I don’t quite have that.”

Know a golf course that could benefit from the Give-A-Little program? DM the spirits company on Instagram (@sweetenscovespirits) with a suggestion or nomination.

And to hear more from Manning about Sweetens Cove, Augusta National, playing with Tiger Woods and giving golf advice, listen to the Drop Zone on Apple Podcasts or Spotify.