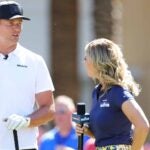 Tom Brady and Amanda Renner at The Match in Las Vegas on Wednesday.

Tom Brady took a break from the action during Wednesday’s quarterback showdown in Las Vegas to remind us that being the greatest football player of all time opens quite a few doors.

While he waited for Patrick Mahomes to play a shot midway through the round, Brady chatted with Amanda Balionis Renner, who knew to ask him about a recent bucket-list moment. Brady dished on a trip that he and his father Tom Sr. took with Rory McIlroy and his father Gerry after this year’s Masters.

The Bradys and McIlroys have known each other for years; Tom and Rory met in 2015 and played golf shortly thereafter. They have apparently kept up the friendship over the years through golf trips with their fathers.

“We’ve had a great friendship over a long period of time. Rory and his dad Gerry are great people, we love our time together with them,” Brady said on Wednesday.

They’ve played Augusta National before. But this time they added another stop to the trip: Ohoopee Match Club.

Ohoopee is a course in Cobbtown, Ga., 75 miles west of Savannah, designed by Gil Hanse. The course, which opened in 2018, was built on a former onion farm and includes 22 holes — a traditional 18 plus four extra holes for creative alternate routings. It’s built for match play, with risk-reward holes criss-crossing the property. McIlroy is a founding member.

“We played a really cool course in Georgia called Ohoopee and then were very fortunate to play at Augusta,” Brady said.

Ah, yes, Augusta. You might remember that as the course where McIlroy shot a Sunday round of eight-under 64 to finish second place in April. It wasn’t long after that that he returned with Brady.

“Rory finished coming off that incredible round he had there on Sunday at the Masters and we had a little father-son,” Brady said. They were joined by their friends the Hurleys as well as Jimmy Dunne — an Augusta National member who is also the president at Seminole and seems to end up in nearly every single one of these types of stories — and his sons Seamus and C.J.

“We had a great time. It was amazing. I always look forward to those opportunities,” Brady said. As for how the matches went? Brady felt bad for taking so many shots from McIlroy, who he said has an “uphill battle” in matches as a result. As for how the father-son competition went down?

“I don’t know exactly how it came out,” he said. “But I don’t think the Bradys fared as well as we have in the past. But we had a great time.”

I don’t doubt it. Brady fared slightly better in Wednesday’s Match, leaning on partner Aaron Rodgers en route to a 1 up victory.