5 things you should know about Medalist Golf Club 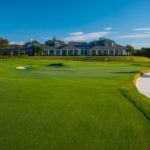 For the second weekend in a row, we have professional golf on the docket. Following the TaylorMade Driving relief skins game, this weekend will feature the The Match: Champions for Charity, featuring Tiger Woods, Phil Mickelson, Tom Brady and Peyton Manning.

This match serves as part two to the exhibition between Woods and Mickelson in 2018 at Shadow Creek Golf Course outside Las Vegas. That match ended with a Mickelson victory in extra holes and came with mixed reviews. However, the addition of the two quarterbacks this time around is sure to add extra intrigue.

Last week’s stage was the venerable Seminole Golf Club, which made its TV debut as Rory McIlroy and a host of others showcased their games on the Donald Ross design. This week, the action shifts 20 miles up the Florida coast to Medalist Golf Club. While Medalist doesn’t have the history of its counterpart to the south, it’s sure to provide a stern test for the four competitors.

Here are five things to know about Medalist Golf Club.

Medalist opened its doors on Jan. 1, 1995 and was co-designed by The Shark and legendary architect Pete Dye, the first collaboration between the two. Later that year the club hosted Shell’s Wonderful World of Golf in a match between Norman and Nick Price (then the top two players in the world), the first public look of the daunting track.

The broadcaster that day Jack Whitaker described the track as “a stern test of golf, the 18 holes here have been fitted among the native pines and sandhills without disturbing the abundant marshes and wildlife that are so prevalent.”

“It’s a course about which we’re going to hear an awful lot in the years to come,” he added.

He got that right.

2. Many pros are members, including Tiger Woods, Rickie Fowler and Justin Thomas

While Tiger might be the most famous member at Medalist, there are plenty of other pros who are members, such as Rickie Fowler and Justin Thomas. Tiger and Thomas have become great friends over the years with their shared Medalist connection surely playing a role. Thomas’ local knowledge of Medalist will be on display Sunday as he joins the broadcast team as an on-course reporter for the day.

But pro golfers aren’t the only celebrities who call Medalist home. Dan Marino is a former club champion and Michael Jordan used to hold a membership as well. Although with the recent opening of Jordan’s club The Grove XXIII nearby, don’t expect to see the basketball legend spending too much time at Medalist these days.

3. The course has a set of tees called the “Tiger tees”

The course underwent a series of renovations in 2015 under the guidance of Bobby Weed Golf Design. Among the changes included adding tee boxes on six holes, known as the “Tiger tees.”

“We needed to make some accommodations for this generation of golfers that has taken the game to another level,” Weed said, according to Golfweek. “We don’t want these players to have to throttle back too much.”

4. Medalist’s course record is shared by Tiger and Rickie Fowler

5. It is an extremely difficult layout

Speaking of how hard the course is, the rating is an insane 77.9 (!) from the Tiger tees. When tipped out to those tee boxes, the course plays at a meaty 7,571 yards. Factor in the various dangers throughout the course and you’ve got a recipe for a beast of a golf course.