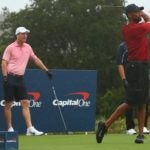 Tiger Woods tees off on the first hole on Sunday.

Golf is back, and with it comes the second iteration of The Match between Tiger Woods and Phil Mickelson. This time the two pair up with a couple of NFL greats in an exhibition match to raise money for coronavirus relief efforts. Woods will team up with Peyton Manning while Mickelson is paired with newly acquired Buccaneers quarterback Tom Brady.

Medalist Golf Club plays host today, as the posh south Florida club makes a TV appearance for the first time since Shell’s Wonderful World of Golf came to town in 1995. Medalist is the home club for Woods and many other PGA Tour pros and is lauded as a golf haven with its pristine conditions.

The action gets started at 3 p.m. ET (as long as the weather holds off) and is being broadcast on TNT, TBS, TruTV and HLN, with streaming options available as well.

We’re tracking all of the action at Medalist and will have live updates throughout the day. Check it out below.

Hole No. 18: Manning and Woods hold on, win The Match II

Mickelson and Brady gave Woods and Manning all they could handle down the back nine, but Tiger and Peyton strung together a dynamite par on 18 to win. Tiger gets his revenge over Phil and wins The Match II.

Manning and Woods have hung on by a thread throughout alternate shot. A pair of pars on 17 leave Peyton and Tiger 1 up heading into the final hole. It’s now or never for Phil and Brady on the 444-yard 18th hole.

Hole No. 15: Phil makes a huge save, Manning/Woods still 1 up

A truly dreadful putt by Brady put the hole in danger, but Mickelson drained an incredible 10-footer to keep the match within 1. Manning and Woods are still 1 up, but the pressure is mounting.

Hole No. 14: The show must go on! Brady and Mickelson keep climbing back

Medalist giveth and Medalist taketh away! After Brady and Mickelson miss putts to win back-to-back holes, Manning misses a three-footer to halve on No. 14. Phil and Tom are just 1 down heading into 15. It looks like they’re going to try to play through the rain, which has lessened some in last few minutes.

Tom and Phil have found a roll in alternate shot, but they just can’t close. That makes two straight holes Mickelson-Brady has had a putt to win and two straight holes they’ve been unable to close out. Tiger and Peyton are still 2 up. Oh, and it’s raining sideways now. We could be looking at another delay if this keeps up.

Hole No. 12: Another halve and Manning/Woods are still 2 up

Mickelson and Brady kept their momentum going on the par-3 12th. Woods and Mickelson hit irons to inside 10 feet, but both playing partners missed the birdie putts to halve the hole. Manning and Woods are still up 2 up.

Hole No. 11: Mickelson and Brady get on the board

Brady and Mickelson were in a great spot on 11, a short par-4. Brady found the fairway, meaning Mickelson could rip away with his driver. And that he did. He found the back of the green and Brady came up clutch, draining the eagle putt for a 2 and the pair’s first won hole of the day. Woods and Peyton 2 up.

Hole No. 10: Modified alternate shot starts with a halve

The players started a modified alternate shot on the back nine, and they used drives from Brady and Woods to open the par-4 10th. Mickelson then missed his iron shot over the green long, and Manning barely missed his, resting on the fringe. Brady nestled his shot to about seven feet, which led to a generous concession from Woods. Woods couldn’t make his putt and they hauled with another par.

Brady knocked his tee shot in the water on 9 — don’t worry, Tom, we still remember your shot on 7 — but Brady and Mickelson still managed to halve the long par-4 9th. Mickelson’s long birdie try for the win didn’t fall. Now they head to the back nine where they’ll play a modified alternate shot. Tiger and Peyton are still 3 up.

It had been a rough start for Tom Brady, but of course he came up with the shot of the match on the par-5 7th. Brady HOLED OUT from the fairway for birdie, and when Tiger lipped out his eagle putt it was good enough for a halve. Woods and Manning are still 3 up. Check out Brady’s shot below. Amazing.

With the QBs stroking again on this hole, Manning took advantage for a net birdie on the long par-4 to give his team a 3-up lead. Brady’s struggles bled into his short game as he bladed a chip over the green on the way to a double bogey. On to the 7th.

The 5th was the one-club challenge with each player electing to use a long iron for the duration of the hole. Brady’s struggles continued as he found the water with his tee shot, and then he had a difficult time determining how to take a drop. Phil had a Phil-esque recovery from the trees and nearly escaped with par before settling for bogey, while Tiger lipped out his par putt as the teams tied the hole.

With Brady struggling, Charles Barkley pledged $50,000 to charity if the QB hit the green. He didn’t even come close. His partner didn’t fare much better while Tiger knocked his shot within eight feet. Manning also knocked his approach on the green and holed his lengthy birdie putt to put their team 2-up.

Sidebar: Twitter is currently ROASTING Brady for his struggles.

Although the QBs were stroking on the par-5 3rd, it was still a struggle for them as both had trouble off the tee, missing yet another fairway. Tiger had no problems as he smashed a drive down the middle to win the first long-drive competition. A towering fairway wood came next as he hit it just off the back of the green. He had no problems with up-and-down from there for a birdie and the first lead of the day.

The QBs fared much better off the tee this time, although Brady did take a penalty stroke after an errant second shot. It was relatively uneventful from there as the two sides tied the hole with pars. On to the first long-drive challenge on No. 3.

Hole No. 1: Nervy start for the QBs

It wasn’t the prettiest of starts for the QBs. Both pulled their tee shots left and Peyton was forced to take an unplayable. The hole came down to a couple of five footers which the pros drained with little problem. The play matches the conditions so far — sloppy.

With an ominous forecast in the Medalist area, the start of the Match has been pushed back 45 minutes to 3:45 p.m. Fluid situation but a source on the ground indicated that is the current plan.

While TNT will carry coverage of the Match, GOLF.com will be airing our own second-screen experience for viewers. Check out below as our staffers are joined by Medalist members, Top 100 teachers, senior writers down in Florida, etc., as they break down the day’s events.