The stress of being put on the clock, according to a major champion 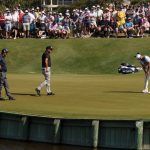 Padraig Harrington, Phil Mickelson and Jason Day in the second round of the PGA Championship.

The PGA of America is permitting rangefinders at this PGA Championship with the hopes of speeding up play. It’s impossible to say with any certainty what impact the devices have had in that regard, but one can say with confidence that through two rounds on the Ocean Course pace of play has not been exemplary.

Five-and-a-half-hour rounds have been common, as players debate club selection in the gusty conditions and calculate how best to manage tricky chip shots around the course’s raised greens. On Thursday, officials hit Jon Catlin with a one-stroke slow-time penalty, the first time such a ruling has been enforced at a major since 14-year-old Guan Tianlang was docked a stroke by the green coats at the 2013 Masters.

In the second round at Kiawah, Padraig Harrington felt the heat of the slow-play police when he and his playing partners, Phil Mickelson and Jason Day, were put on the clock.

Perhaps we should have seen it coming.

Harrington, to put it mildly, goes about his business deliberately; in 2002, Retief Goosen called the Irishman “definitely the slowest player on the Tour.” Day is no speedster, either. Mickelson, meanwhile, was working his way up the PGA Championship leaderboard on a breezy day on one of the most demanding courses on the planet. Every shot, yardage and decision mattered. It was a perfect grind storm.

And grind they did!

The group was first put on the clock on the par-4 3rd, where Day lost a ball. Harrington said he and his playing mates were monitored for about another three holes. “Nobody is comfortable on the clock,” said Harrington, who went on to bogey both the 4th and 5th holes before bouncing back with a birdie at 6. “You’re always wondering where you stand.”

Harrington said it’s been “a long time” since he was timed, and that players are much more likely to run into the predicament when they’re in a marquee group, or “a good TV group,” as he put it.

“Managing that sort of stress is something different,” he said.

“It’s pretty easy to be on the clock if you’re in position,” he said. “It’s very difficult if you’re out of position. If you really get into an awkward situation” — of which there are no shortage at Kiawah — “it can be difficult. But if you hit fairways, you hit it on the green, the 40 seconds is bundles of time to hit a golf shot, assuming that you’re not struggling having to walk off a 60-foot putt or something like that.

“If you want to be a good player, unfortunately you’re going to end up a lot of times in those sort of groupings where it gets a little tighter and more time is taken.” Put another way, Harrington added, “It’s very easy to stay off the clock if you’re playing terrible golf.”

Day echoed a similar sentiment in 2017 when pushed about his slow-pay rep.

“The only reason why I think a lot of people think I’m slow is that when I was playing well, I was in a lot of groups on Sundays, in the last few groups and usually everyone takes their time on the last few groups on Sunday,” he said. “To be honest, I don’t really care what people say. I need to do what I need to do to win a golf tournament. And within reason of respecting other players and the Rules of Golf.”

But back to the Harrington-Mickelson-Day grouping. Did they deserve to be clocked on Friday? The ever-candid Harrington believed so, adding that in the both the first and second rounds, he and his partners “struggled to keep up.”

“It was fair enough that we were on the clock,” he said. “I’d say the three of us were average at best.”