Want to really understand Phil, the surprise leader of the 2021 PGA? Ask somebody else 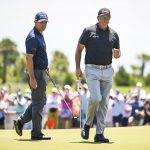 Padraig Harrington had plenty of insight to offer on playing partner Phil Mickelson.

KIAWAH ISLAND, S.C. — They say if you want to know something about a person, you’d better ask somebody else.

The Irishman is most often cited as the European Ryder Cup captain or pre-eminent online swing-tinkerer these days, but this week he’s playing some fine golf, too, opening 71-73 in the wind at the PGA, inside the top 20.

But in this case Harrington was the man of the hour because he played Thursday and Friday with Mickelson, the 36-hole King of Kiawah. Mickelson shot 70 on Thursday and 69 on Friday. He’s tied for the lead with Louis Oosthuizen.

We’ll get to Harrington, our Chief Phil Correspondent, in a minute. After Mickelson signed his card — which included five birdies on his final eight holes and a five-under 31 coming home — he made his way through a handful of TV and radio hits. By the time he was ushered in to meet with reporters, he insisted, through a PGA of America official, that due to a tight schedule he could only field three questions.

That is, of course, well within Mickelson’s rights. Sure, the “tight schedule” bit strains credulity — at least 26 hours separated the finish of his second round and the beginning of his third — but the dude is leading a major championship. I’m happy to give him the benefit of the doubt. And let him get to lunch.

In the press room, Mickelson fielded three questions and one follow-up. The best thing he’s done this week, he said, is judge the wind, pick the right club and judge the flight correctly. He admitted some signs of weakness, citing “a few shaky strokes on 16, 17 and 18 where I was very tentative.”

He said he’s been working on “elongating his focus,” playing 36 or 45 holes in a day as one form of training, extending his meditation sessions as another. Physically, he feels fine. But he’s still chasing that clear picture. Also, he’s having a lot of fun.

That’s all we got from Phil, who skipped on questions altogether on Thursday, when he insisted it was time to get to the range. So Lefty left the assembled somewhat unsatisfied, having neglected to help us answer the question: How should we make sense of our 36-hole leader?

Mickelson is 50 years old and this generation’s second-best golfer. He’s won as recently as 2019 and finished runner-up at a World Golf Championship just last summer. He throttled the competition in his first Champions Tour start and continues to impress in a variety of exhibition golf challenges. In other words, he’s still got game.

But it’s hardly been sunshine and roses these last few years. Mickelson has either been right in the hunt or well off the pace. He has just two top-20s on Tour in 24 months. He talks of mental lapses, of focus issues. Strange diets. Coffee.

Re-enter Harrington, because he’ll be doing the heavy lifting the rest of the way. The best way to understand the 50-year-old Mickelson is to ask the 49-year-old Harrington. He seemed reluctant about that role, for just a moment, when first asked about Mickelson’s play on Friday.

“Yeah, he’s had two great nines. He’s played really well. Yeah, some fine golf there,” he said. It looked for a moment like he might leave it there. But Harrington is a top-notch talker, and he couldn’t resist pressing on. “In general I would have said he’s — like, I wouldn’t put it past him. In the position he is, I expect him to contend, and I wouldn’t put it past him being there at the end of the week, for sure.

It’s worth considering the similarities between Harrington and Mickelson. Their shared history began at the 1991 Walker Cup at Portmarnock. They’ve been Ryder Cup opponents. They’re in a rare crew of modern players with three-plus majors. They’re each tinkerers and outside-the-box thinkers obsessed with optimization. They’re each showmen, too — a quick scan of their respective social media accounts will tell you that. But when Harrington calls Mickelson a player, he does so with the highest admiration. He appreciates their shared competitive spirit above all.

If you’ve been reading this website for long you know the same is at least as true of Mickelson, the Tour’s cheekiest gambler and most notorious Tuesday gamer.

The similarities don’t end there, though. Harrington is at his most insightful when talking about what it’s like to age as a competitor. Back to you, Padraig!

“Unfortunately as you gain experience, you lose innocence,” he said, aware just how perfect a sentence that is. “There is a sweet spot on the way up when you’re gaining a bit of experience, and yet you have that innocence as you get older. Myself and Phil, yeah, we have experience, but we have some scar tissue in there and we can overthink things at times.”

There’s nothing I can add that would improve on that analysis, so I’ll skip you ahead to Harrington’s next bit of Irish insight.

A particular challenge of aging, Harrington added, isn’t just what happens to your body and your game. It’s also a challenge dealing with the younger golfers filling in behind you.

“New kids come on the block and you’re looking over your shoulder and you’re wondering: Is your stuff good enough?”

Harrington continues to draw motivation from that exact question. He suspects Mickelson does, too.

That competition keeps each man coming back for more. It keeps them grinding on the small things. But Harrington finished by thinking big-picture.

“I assume there’s hardly any person in the world who wouldn’t want to swap their lifestyle with what I do, even if it’s not as good as it used to be,” he said.

It’s not often that media members are at a loss for words, but as Harrington walked off the room fell silent, stuck in contemplation, thinking about the 49-year-old and the 50-year-old and what lies ahead this weekend.

“Sorry,” he said as he walked off the podium, flashing a grin. “That got a bit philosophical.”