Want to get great at golf? ‘Put something on the line,’ Padraig Harrington says 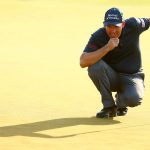 Padraig Harrington looks over a putt on Friday on the 10th hole on the Ocean Course at Kiawah Island.

Padraig Harrington, through two rounds at this week’s PGA Championship, is at even par, will play on the weekend at a major for the first time in five years and is within striking distance of the top of the leaderboard, which, when the 49-year-old finished on Friday, was occupied by 50-year-old Phil Mickelson. With three majors, 29 total victories and an upcoming European Ryder Cup captaincy to his name, he is playing with house money — and stacking chips with it.

“I’m a little bit like that, too. I have no interest — if you turned around to me this week and said to me now I’m going to finish 10th, I’d actually say no, because it doesn’t do my career any good.”

Where then, with Harrington three months short of 50, does that mentality come from?

“I’ve always enjoyed overcoming things and not — especially if somebody was better than me. I really liked to beat somebody. It would be the same now, if we went and played darts, if you were way better than me, I’d have no interest, but if you were a little better than me, it would really give me a boost to try and beat you.

“I like the idea of somebody is supposedly better, I like being able to do that. So yeah, a very competitive nature.”

Harrington is not naive. He’s getting longer in the tooth, and not longer off the tee. It’s not 2008, when he won both the Open Championship and the PGA Championship. “You know, the disappointment for me now, and this really sums up how the game changes and the ebbs and flows, in 2008, it was inevitable I was going to win majors, so it didn’t bother me if I didn’t have a good day,” he said. “I knew I just had to turn up, play my game, and that would put me in position to win majors and it would happen. Now I turn up at a tournament and I think everything has to go right. I’m afraid that I can’t — I can’t take as many punches. I can’t take as many mistakes. I feel on edge to compete.”

Still, Harrington is competing. And that’s better than not.

“I know I waned quite a bit there three, four, five years ago when my putting really went south on me. You start wondering do you want to do this,” he said. “But thankfully after a couple of years of that, you kind of go, well, even if you’re not playing your best golf, I actually quite like being out here and doing what I do.

“I really like playing golf, and the reality of it is — I assume there’s hardly any person in the world wouldn’t want to swap their lifestyle with what I do, even if it’s not as good as it used to be.”