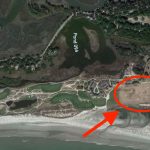 KIAWAH ISLAND, S.C. — At the Ocean Course, the challenge begins before you even step onto the 1st tee — and it’s posing an awkward challenge for players.

Most of the time, the driving range, for pros, is nothing short of sanctuary. You show up when you want, take your time to get ready, have a little chat to cut the tension and get dialed-in long before your round. It’s a kind of waiting room; a controlled environment.

But not at Kiawah.

Why? Because both nines at Kiawah are mirror images of one another: They start relatively more inland, then halfway through the nine, turn around and run alongside the ocean until they’re back at the center of the property.

And at the center of it all is the driving range — aka, a wide open expanse of land sitting alongside the ocean. There’s probably no more exposed piece of land on the entire property, and certainly none that pros have to spend such a large amount of time on.

And Kiawah Island, as you’ve no-doubt heard by now, is windy even on “calm” days. All of which is to say that the range gets really, really windy.

That may not sound like a big deal to you, but it probably should be. It’s the kind of thing pros think about a lot.

If the wind is blowing southwest, it’ll make a straight shot look like a high slice.

If it’s gusting in the opposite direction, a draw can start looking alarmingly hooky.

Without offering too much of a diversion, I’ve experienced this first-hand. During high school I used to play a junior tournament here at the Ocean Course, and hitting a series of golf shots that feel good, only to see them hook or slice away is the last thing you want before playing what you know will be a difficult slog-of-a-round.

“It is nice to actually hit some good golf shots and go out there with a little bit of confidence. I didn’t have that today,” Tyrrell Hatton said after his opening-round 71, which followed a bad warmup. “I didn’t feel like I was going to have a good day with just how bad I actually did hit it. I was pretty miserable.”

While practicing in the wind is important — essential, even — it’s something players say only helps in small doses. They want to get warm, to build confidence and to get their bearings. If they see a lot of movement on the ball, they’ll subconsciously start compensating in their swing. It may start flying straight on the range, but when they get to the course, it’ll be going in the wrong direction.

“I don’t want to stand there and spend an hour leaning on my left side trying to keep the ball under the wind because it’s not the only shot I’ve got to hit this week,” Adam Scott says.

“It starts on the driving range,” added Shane Lowry. “You’re standing there, and you’re hitting your driver, and your numbers are on the screen and the driver has gone 240, you’re like, ‘it’s going to be a long day today.'”

Even PGA Tour players accept they can’t control the weather, so they’re mostly trying to avoid it. Before their round they’re opting for abbreviated practice sessions to get warm and get out of there with minimal damage, aiming as much into the wind as possible.

“I’m not hitting a lot of balls on the range,” Scott said.

And then after their round? Skipping it all together.

“There’s no getting work done this afternoon,” Robert MacIntyre said after an opening-round 75. “It’s blowing over 20 miles an hour. The best place for me is in the apartment.”