Rangefinders (now legal!) present at PGA Championship but not prevalent 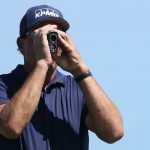 Phil Mickelson shooting a yardage in the first round.

KIAWAH ISLAND, S.C. — History, Tour-style, was made on Thursday. For the first time, professional golfers and their caddies were permitted to use rangefinders in competition in a major, and in any event sanctioned by the PGA Tour. And did they ever!

In a half-day of watching golf, on the course and in person, there were definitely times you saw the devices in use by players you know and love.

And there were, to be sure, other player-caddie teams with binoculars in the bag, or in a case that clipped to the outside of the bag. But their use was not at all commonplace.

Golfers are creatures of habit and there is no sign at all that the yardage book is going to become extinct anytime soon.

Of course, yardage books are depositories of vast amounts of information, recorded by players and their caddies.

Now if the day comes that that information may be recorded on a smartphone or even a rangefinder, that may cause traditional yardage books to go the way of certain great broadsheet newspapers. The New York Herald-Tribune, for instance.

Rangefinders manufactured by Bushnell were, by far, the most commonly found devices. Also, even though there was nothing to prevent both a player and his caddie from each having a device, there was no evidence of any player-caddie team doing that.

The PGA of America, the tournament’s organizing body, permitted rangefinders to be used for measuring distance only, even though many of these devices can measure elevation change as well with the flip of a switch. To prevent that from happening, some caddies taped the button to its distance-only position.

Another company that manufacturers distance-measuring devices also had representation in Thursday’s play. Caddies were saying that the brand was making inroads in a tried-and-true way, by offering a quality product and giving the players an incentive — reportedly $25,000 — to use it.