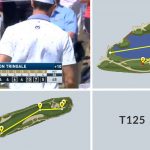 Cameron Tringale's Friday meltdown was the stuff of legend (and nightmares).

At 1:00 p.m. local time on Friday, Cameron Tringale stood tied for second at the PGA Championship. By 2:45, he’d fallen into a tie for 125th place.

How does an individual fall one-hundred and twenty-three leaderboard spots in the span of a little under two hours? Well, a quintuple bogey and a quadruple bogey on consecutive holes is a good place to start.

Yep — that’s right. It took till Friday afternoon, but the Ocean Course at Kiawah Island has given us our first PGA Championship meltdown.

It should come as no surprise that Kiawah’s dastardly closing stretch served as the venue for Tringale’s collapse. Over the first two days at the PGA, the closing five holes (14-18) have played directly into the wind. On Thursday, those five holes yielded 367 bogeys-or-worse, leading to a back-nine scoring average well above par on each hole.

Things first turned for Tringale on the 14th (his fifth hole after beginning his round off the back), where he recorded a triple-bogey 6 to drop to even par. But it was on the par-5 16th that the wheels truly fell off.

Tringale began No. 16 by blasting his first two drives into the lake. His third drive (and fifth shot) stayed dry, but only because he blocked it into the native area to the right. Finally, on his sixth shot, he found the fairway — but only 30 yards from where his tee shot landed. Two iron shots and two putts later, Tringale carded a quintuple-bogey 10.

Now, it’s important we note there are few good ways to walk up to the Ocean Course’s 17th hole. The terrifying, forced-carry par-3 is one of the most intimidating tee shots in the sport…on a calm day. On Friday afternoon, with 20+ mph gusts blowing in his face, Tringale stepped to the 17th tee reeling from the sledgehammer his chances of contention received only seconds before.

Evidently feeling the pressure to turn his rotten luck into a handful of birdies, Tringale played a club short on the 17th and promptly dumped his tee shot in the water. But the carnage would not stop here. He overcompensated from the drop area a few seconds later, sending his approach shot towering over the green and into the sand.

His nightmare seemed over when he knocked his sand shot to five feet, but in fact, it was only beginning. Tringale missed his first putt, then missed the second — a two-footer — for good measure. He walked away from No. 17 with a quadruple-bogey 7.

Tringale stepped to the 18th tee an awe-inspiring nine over on the tournament, and nine over for his last two holes. He’d hit three balls into the water, two shots into the sand, and missed two putts from inside of 6 feet; in the process dropping from tied for 24th to tied for 125th. Perhaps most inconceivably, from our friends at DataGolf, Tringale went from a 3.6 percent chance of winning the PGA before he teed off Friday to a .4 percent chance of making the cut at the turn.

Kiawah Island promised us carnage, and thus far, it has not disappointed. Now, on behalf of the high-handicappers watching from home, somebody get us Cameron’s Venmo account so we can buy him a drink.