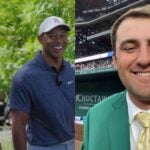 Tiger gives a clinic, and Scheffler rocks the green jacket.

First off, my sincerest apologies for being a day late in this week’s edition of the Rogers Report™️. I hope you didn’t lose too much sleep awaiting its arrival. This write-up comes to you on a Tuesday because I spent Monday at The Country Club for the U.S. Open media day. The caddies in my group, Matt and Joe Russo, are identical twins and seniors at Boston College (my alma mater!) and we had such a blast. Here I am:

And one more housekeeping note: I got new golf clubs and I am very excited about them. I wrote all about my fitting experience here, but it’s such a treat to have a new set for the first time since high school.

Okay, okay. Enough about me. Let’s get into the good stuff.

Congrats to Lacey and Max Homa, who announced last week they are expecting a son!

Nothing, and I mean nothing, gets the TV broadcasters going like a new pro joining the fatherhood club. Tiger, DJ, Rory McIlroy, Jon Rahm and Jordan Spieth have all fallen victim to the “being a father has really brought some new perspective to his game” storyline, so I’m excited for Max Homa to get a healthy dose of that as well!

In all seriousness, though, these videos are so wholesome and I bet being a father does bring a new perspective to competing on Tour. Congrats to the lovely couple.

Folks, I have been worried sick about Phil (read: I’ve wondered what he’s up to a few times over the last few months).

Thanks to the Fire Pit Collective, we got a pulse check from the 2021 PGA champion last week.

I’m curious about a few things here. I’m not a swing doctor so I’ll stick to other questions. Who is he playing with? Has he been showing face at courses often? How did we go this long without any leaked photos or videos of him? The man went 64 full days without being seen or heard from, which in this day and age is nothing short of a miracle.

The return of Steve Stricker

Steve Stricker came down with a mysterious illness shortly after leading the U.S. Ryder Cup team to victory last fall. He lost 25 pounds and his heart rate was through the roof, but he’s battled back and made his return to the PGA Tour Champions this past week. And his daughters got a front-row seat for it!

I’m happy Stricker’s healthy, excited that he’s back and love that his family got to see him tee it up again!

Jeff Knox is BACK

This might be a radical take, but I believe the best part of the Masters is when an uneven number of players make the cut. Why? Because it means that Jeff Knox, Augusta’s resident Masters marker, gets to tee it up. He’s a phenomenal amateur, and it’s fun to watch a regular guy (read: a guy whose job isn’t golf) play alongside the best in the world. Not only do I love to watch Jeff Knox play, but the pros love to play with him. Check out what players, including Rory McIlroy, Justin Thomas, Kevin Kisner and Steve Stricker, have said about Knox here.

Anyway, I was bummed when Knox didn’t get to play the weekend at Augusta National in April, but I was thrilled to see his name appear online over the weekend.

Knox teed it up in the Coleman Invitational at Seminole and tied for 22nd in the senior division. The second-round 85 may have set him back a little, but look at that first round. Even par! You may recognize some of the other names in the field, such as Stewart Hagestad, Jessica Korda’s husband Johnny DelPrete, Tony Romo, Massachusetts amateur golf hero Matt Parziale, and even fellow Rhode Islander, Bobby Leopold. Oh, and Gerry McIlroy played in the event as well.

Tiger and the TGR Foundation hosted Tiger Jam last week, which is great news for us because it provided some awesome Tiger content.

Eldrick and Collin Morikawa hosted a clinic together, and it was so nice to see Tiger laid back and enjoying himself.

Give me all the Tiger Woods content and I’m a happy gal.

Now for something more serious. I’ve said it once, and I’ll say it again. No one rocks a dad jean like Mr. Tiger Woods.

I’ve embedded the above photo here so you can get a full look (you are welcome, dear reader).

The button-down shirt! The jeans! The sneaks! Upon doing some research, I’ve come to the conclusion that these are likely the same jeans Tiger wore one evening at the Hero World Challenge.

Now, let’s take a look at some jeans of Tiger’s past, shall we?

Like Tiger’s golf game, his jeans game is a process. But I like the direction he’s heading in, as his Tiger Jam denim seems to be his best yet.

Sick of the Tiger talk? Too bad! The 15-time major champion was seen (stalked?) on a trip to 2022 PGA Championship host site Southern Hills last week.

The man looks good! There were even helicopters overhead to check out Tiger’s game.

Slow news day in Tulsa? I’m all for Tigermania, but this does feel like a bit much. Then again, golf fans tracked his private jet’s trip to Augusta, so I guess when it comes to Tiger, privacy is off the table. Unless, of course, we are talking about his yacht.

Rahm may have won for the first time since his 2021 U.S. Open victory on Sunday, but I was mainly focused on Kepa’s Air Jordan 3s. This is what the cool teenagers are wearing, and Kepa just single-handedly redefined toddler fashion. Best of luck to his future classmates who have no chance at competing with this kid’s style.

The green jacket goes out for a spin

Scottie Scheffler had not worn the green jacket in public since Masters Sunday until last Wednesday, when he threw out the first pitch at the Texas Rangers game.

It’s difficult to swing a golf club in a jacket (which is why I’m guessing Scheffler went with his infamous vest on Masters Saturday instead), and I can’t imagine it’s any easier to throw a baseball in one. As far as first pitches go, I think Scheffler did a splendid job. But his Masters champion duties weren’t over for the week following that pitch. He and the green jacket headed to a Dallas Stars game next, where he dropped the puck, but not before announcing the starting lineup.

What a natural! Videos like this remind me that athletes from all sports have respect for pro golfers, especially the Masters champion. How could they not?

Now that Scheffler has checked off baseball and hockey green-jacket appearances, I can’t help but wonder what’s next. Basketball? Soccer? A piano recital or junior varsity lacrosse game in Dallas? The possibilities are endless!