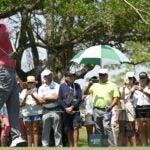 Jon Rahm hits his tee shot on Sunday on the 14th hole at the Mexico Open.

Jon Rahm was the overwhelming favorite to win before any ball was struck this week at the Mexico Open. And he held at least a share of the lead after Thursday, Friday, Saturday and Sunday. And he was, in fact, the winner when the last ball was hit Sunday at Vidanta Vallarta Golf Course, his tap-in for par on the 18th.

But throughout? A grind. That’s not to be a surprise. While Rahm was the highest-ranked player in the field, it’s not as if he were playing as a single for four days. But this route to victory speaks to the player Rahm is. Far from easy is it to go out and do what everyone thinks you should. That’s pressure. The 27-year-old Spaniard did it similarly last year at the U.S. Open at Torrey Pines, where he’s enjoyed a good amount of success. And Rahm did so again at the Mexico Open, leading wire to wire and earning his first win since his major championship breakthrough last June.

Behind a two-under 69 in the final round, Rahm won by a shot over Kurt Kitayama, Brandon Wu and Tony Finau — Wu and Finau each shot course-record 63 — and by two strokes over Davis Riley. The victory was Rahm’s seventh on the PGA Tour, but it was far from a given.

After rounds of 64, 66 and 68 — he missed the twos pattern by a stroke! — Rahm began Sunday with a two-shot lead, and he treaded water as the field inched closer. Rahm birdied 6 and 7. On 10, despite eventually bogeying the hole, he caught maybe the break of the tournament, after he hooked his tee shot left and toward the penalty area, only for it to hit a cart and bounce back toward the fairway.

Rahm’s back in the winner circle. He’ll have momentum with three majors ahead.

— Jon Rahm begins the final round with a two-shot lead over Kurt Kitayama and Cameron Champ, and a three-shot lead over Nate Lashley, Patrick Rodgers and Davis Riley.

— Rahm birdies the 584-yard, par-5 6th after hitting the green in two — his first birdie of the day — and through six holes, he leads by one. He’s at 16-under, Champ and Kitayama are at 15-under, and Brandon Wu and Alex Smalley are at 13-under.

— Champ triple-bogeys the 486-yard, par-4 8th after hitting his drive into the penalty area, and he falls back. Rahm is at 17-under, Kitayama is at 16-under, and Wu and Smalley are at 14-under.

— The 500-yard, par-4 10th is notable for the final group. Rahm hits his drive left and toward the penalty area, but it hits a cart and bounces back toward the fairway — but he doesn’t hit the green with his second shot and he bogeys the hole. Kitayama hits his drive into the water, and he bogeys the hole. The lead doesn’t change, and the leaderboard reads this way: Rahm is at 16-under, Wu and Kitayama are at 15-under, and Smalley, Aaron Wise and Tony Finau are at 14-under.

— Kitayama birdies the 661-yard, par-5 12th after hitting his third shot, from just right of the green, to 4 feet, and he moves into a share of the lead. Rahm, Kitayama and Wu are at 16-under, Finau is at 15-under, and Wise, Smalley, Riley and Champ are at 14-under.

— Finau birdies the 537-yard, par-5 18th after hitting his second shot to 5 feet, and he moves into a share of the lead. Rahm, Kitayama, Wu and Finau are at 16-under, Riley is at 15-under, and Champ, Wise and David Lipsky are at 14-under. Finau and Wu set course records with eight-under 63s.

— Rahm, on the 18th, hits his drive just above the lip of a fairway bunker, lays up short of the green, then hits his third shot to 23 feet. From there, he two-putts for his first victory since last year’s U.S. Open.

“I don’t look at bets or anything like that. I like to think every time I tee it up I’m the favorite because I’m out there to win and I’ve been playing pretty good the last few years.” — Jon Rahm on CBS after his victory