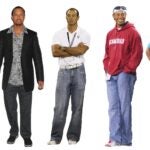 The many jeans of Tiger Woods' past.

Hello everyone and welcome back to the Rogers Report. A LOT happened in golf social this week, so let’s get right into it.

Collin Morikawa may have lost his five-shot lead on Sunday at the Hero World Challenge and pushed back his opportunity to become World No. 1, but it was still a week to remember for the 24-year old. Morikawa got engaged to longtime girlfriend Kat on November 30th and shared the news via Instagram.

For those of you who aren’t familiar with Kat, here are some fun facts about her:

a) She’s Canadian! Kat is from Vancouver, but will hopefully root for Team USA in the Presidents Cup. Only time will tell.

b) She’s a REALLY good golfer. Kat played golf at Pepperdine University, where she maintained a scoring average of 76.54. Check out her swing:

c) She and Collin have a REALLY cute dog named Koa. They even have an Instagram account for their pup, who appears to be living quite the life.

The guy’s had it all in 2021: a major championship victory, a Ryder Cup win and … someone to personally curate his playlists for him. And a silver lining for the future Mr. and Mrs.: there’s no question what the highlight of young Collin’s week was. Congrats, you two! And shoutout to Keith Pelley for respecting the proposal embargo.

Attend a major. Play a few top courses. Tee it up overseas. Make an ace. These golf bucket list items are good, but I have set my heart on something even better (and significantly less likely to happen). I want to attend a TaylorMade shoot, and I’m about to convince you why you should, too.

Oh, to be a fly on the wall here! First off, the TaylorMade staff is stacked — Tiger, Rahm, Rory, Morikawa, DJ, the list goes on. Watching these guys yuck it up in a no-pressure situation is the dream of every golf social manager. And if last year’s TaylorMade Christmas card won’t convince you … well then, I don’t know what to tell you.

I can’t wait to see what Team TaylorMade came up with for this year’s card.

3. Viktor Hovland at the airport.

There are a handful of things in this life I don’t think I’ll ever fully understand: fax machines, trigonometry and, most pressingly, Viktor Hovland’s social media presence. He’s not on Twitter, but his Instagram is equal parts confusing and hilarious.

Anyway, I stumbled across this tweet last week and didn’t think much of it… until he won the Hero World Challenge on Sunday.

Viktor Hovland, four-time PGA Tour winner, plays “a bit of golf!” I love it. He’s now the No. 7 player in the world. That’d be like Taylor Swift saying she writes “a bit of music.” Or Leo DeCaprio saying he “does a little bit of acting.”

The fact Viktor went out and won the event a few days after this happened makes it even better.

I love when pro golfers get into sports rivalries on Twitter. Alabama played Georgia on Saturday, which meant one thing: Justin Thomas and Kevin Kisner would have some type of bet going on. When Georgia lost in 2018, Kisner had to wear an Alabama jersey during the Sony Open. This year’s bet was a little more tame, but still entertaining:

The pros are just like us when it comes to college football! (Well, not like me because I don’t really follow it, but lots of other people do.)

More Eldrick content! After months of silence from him, it’s a treat to see (and hear!) so much of him over the last week. From his press conference to his driving range exploits, Golf Twitter has exploded over his every move. Dissecting a golf swing isn’t my forte, so I’ll stick to what I know best: social media posts.

First, let’s take a look at these photos from Long Drive pro Martin Borgmeier earlier in the week and then Tiger on Sunday.

Now, I’m no fashionista (particularly not after working from home for the last 20-something months), but I do think it’s safe to say there’s been a lot of growth here. He’s gone from the ultimate baggy dad-fit (nothing wrong with that!) to a trimmer, more tailored fit, which makes him look younger and more stylish. Bravo.

And finally, I’ll leave you with this post. I have no idea what to make of it, but it feels worth sharing. I’d love to know what DJ and Usain discussed at this event. Anyways, I’ll see you all next week.