Rogers Report: Was this professional golf’s wedding of the year? 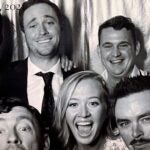 Jessica Korda had some familiar faces at her wedding

Hello friends and welcome back to the latest edition of the Rogers Report, golf’s premier social media deep dive roundup. This week’s content was particularly family-oriented including but not limited to: a wedding weekend, a father-son lesson and a very notable PNC Championship commitment. Let’s get right into it.

There will be a lot of talk of Tiger and Charlie Woods this week at the PNC Championship, but let’s not overlook this other father-son duo. Claude Harmon III gave 78-year-old Butch, the king of golf instruction, a lesson over the weekend. Claude’s post about it is equally wholesome and inspiring.

This is like, a Mensa meeting of golf instruction. Just two guys (who happen to know more about the golf swing than anyone else on this planet, and also happen to be related) having a little range sesh! And if Butch Harmon is working on his game this winter, you should be too.

Jessica Korda had the bachelorette party of the year a few weeks ago in Miami, and she and Johnny DelPrete tied the knot at the Pelican Club in Jupiter over the weekend. There was no shortage of golf talent in attendance, and luckily, for us, there was also no shortage of Instagram wedding content. One Instagram led me to another, and soon I was down the rabbit hole. This wedding was a social media case to be solved and I became a detective. I can tell you who wore what, who sat at Table 5 and how, exactly, their dog was featured in the wedding.

A post shared by A L E X A N D R A (@alexandra.olaughlin)

Seeing golfers in their off-course clothes is a little like running into your teacher at the grocery store. It’s a little bit shocking at first. But everyone cleaned up so nicely! Nelly Korda, Megan Khang, Alison Lee, Sophia Popov, Mel Reid, Morgan Pressel, Patrick Cantlay, Justin Thomas, Rickie Fowler and Bud Cauley were there. There was a photo booth. Vanilla cake was served. Loose curls was the bridesmaid hairstyle of choice. The pictures were lovely — not just of the couple, but of other golfers and their significant others enjoying themselves at what might be the pro golf wedding of 2021.

John Daly and I both love golf, but I think that’s the only thing we have in common. I am, however, always fascinated to learn what he’s up to. This video shared on Instagram by PGAMemes might be the most on-brand piece of content I’ve ever seen of the two-time major champion. Daly’s rocking a bathing suit, has no shoes on and is chipping with a drink in hand.

Of course he holes the chip. No big deal for the legend. He and his son, John Daly II, will tee it up at the PNC Championship this week. I can’t wait to see the colorful matching outfits they show up in.

Golf Twitter imploded once again last week when Tiger committed to the PNC Championship with Charlie and this video from last year resurfaced.

The similarities between Tiger and Charlie’s mannerisms here are insane. I’m enthralled by this video, but I also can’t help but wonder how the PGA Tour organizes their video footage. The fact that they were able to dig up old videos of Tiger scratching his nose, adjusting his hat and taking his glove off to match Charlie doing the same in such a timely manner during the 2020 PNC Championship makes me think the Tour just has hard drives upon hard drives of wildly specifically-labeled Tiger content.

That’s all I’ve got for this week, folks. Check back next Monday for a full breakdown of the best PNC Championship-related posts and more.