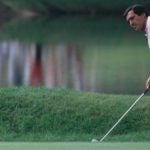 Seve Ballesteros was the first golfer Nike signed to an endorsement deal.

Not a photo of the golf shot, either.

In 1984, Nike entered golf. Its most famous spokesman, Michael Jordan, was just starting his rookie season with the NBA’s Chicago Bulls. One of Nike’s most famous golf spokesmen, Tiger Woods, was 8. Another, Rory McIlroy, was five years from being born. In 1985, Nike signed its first. Ballesteros. Soon after, they needed him to pitch the product.

Ballesteros on a tree.

“Did you know that #Seve was the first player to sign an endorsement with @Nike?” the Instagram account of the late Ballesteros posted this week under a picture of Ballesteros wearing a white visor with the words “Nike Golf” and the Nike swoosh logo in black. “In 1985, he officially carried the famous Swoosh into the world of professional golf.”

Ballesteros on a tree. The legendary Spaniard, wearing an orange Nike Golf shirt, blue pants and brown shoes, is standing on a branch of what appears to be a white weeping willow tree. Other branches and leaves surround him. He’s holding an iron, the ball is resting next to him on the branch, and he’s smiling.

“No problema” is written below the picture.

“Seve appeared on the first @NikeGolf poster addressing a ball in a tree with the headline, “No Problema,” the Instagram account also wrote.