Michael Jordan once took $50 off Seve Ballesteros, because of course he did 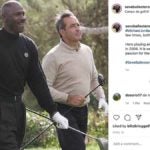 Michael Jordan and Seve Ballesteros in 2004.

The smile stands out. And so does the grimace.

Or was the basketball legend already counting the nearly $50 he was on his way to winning off the golfing legend?

“#Seve and #MichaelJordan played golf together a few times, both in Spain and in the US,” the post read. “Here playing at El Saler, Valencia, back in 2004. It is well known Jordan’s deep passion for the game of golf.”

As ESPN’s recently released documentary “The Last Dance” has shown and various stories have reported, Jordan’s passion for gambling is also well known.

Even with a golfer who won five major championships.

After their first nine holes, Jordan and Ballesteros played for 45 euros, according to several websites at the time, including elmundo.es, elpais.com and alairelibre.cl. The match ended on the eighth hole, with Jordan winning 2 and 1.

“The match went badly because on top of me entertaining him, the guy won 45 euros from me. He played really well and noted that the field/course is very beautiful, something we all knew,” said Ballesteros of Jordan, who was in Spain for the Community Grand Prix Valencian motorcycle race and was joined by, among others, friend Ahmad Rashad and former teammate Charles Oakley.

According to the website elperiodicoextremadura.com, Jordan and Ballesteros met a year later at El Bosque golf course, also in Spain.