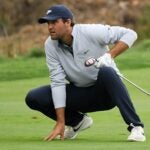 Scottie Scheffler was forced to bid adieu to his Nike VR Pro Ltd 3-wood prior to leaving for Maui.

Making the best of it

It’s every golfer’s worst nightmare: You’re preparing for a big tournament when the face on your favorite driver, fairway wood or hybrid suddenly caves in. A feeling of dread washes over you as you come to the realization that you’ll need to find a replacement. For the average golfer, it might be as simple as going to the local golf shop or digging through the garage for a successor.

Most tour pros have cracked the face on a club and lived to tell about it, too. There’s Jordan Spieth at the 2016 Masters, or Henrik Stenson at the 2013 Tour Championship — the list goes on and on.

But what happens when the face caves and you don’t have an identical backup? Scottie Scheffler was forced to figure out this exact conundrum when his Nike VR Pro Ltd 3-wood finally cracked on the range during a practice session that occurred just days before he was supposed to depart for the Sentry Tournament of Champions.

Unlike most of his colleagues, Scheffler didn’t have the luxury of going home and picking up a backup. With Nike no longer in the hard-goods business, Scheffler couldn’t call up a Swoosh rep and get a replacement. Not to mention the club was initially introduced a decade ago.

For Scheffler, an equipment free agent, the VR Pro Ltd is a club that dates all the way back to his time as a member of the Highland Park High School golf team. You read that right — high school. “I put it away for a couple years in college, but I’ve used it the whole time I turned pro, most of my senior year, and pretty much all of high school,” Scheffler said. “I only wasn’t using it for two or three years in there.

“[I]t was really clean, not a lot of loft so I was able to flight it down pretty easily and it was softer than the new 3-woods and for me that’s important. And when I wanted to hit it far, I just teed it up a little higher, hit it higher on the face. I got to know the club really well and for me I knew exactly what I needed to do with it each time.”

Without an identical build at home, Scheffler reached out to his wife who promptly brought 10 potential 3-woods to Royal Oaks Country Club. After putting each fairway through the wringer, Scheffler settled on a 13-degree Callaway Mavrik.

If there was a silver lining to Scheffler’s predicament, it was the fact he’d been readying himself for this day for months.

During last year’s Rocket Mortgage Classic in Detroit, Callaway Tour rep Kellen Watson built Scheffler a Mavrik for testing purposes with a lie angle that matched up to the flat setup (around 59.5 degrees) on his Nike fairway.

The club wound up being the eventual winner as Scheffler made the trip to Maui with the Callaway in tow. Sometimes it pays to prepare for a worst-case scenario.

Welcome to the show

Callaway’s yet-to-be-released Epic driver landed on the USGA conforming list at the beginning of the week and was immediately put in play by new signee Jon Rahm (10.5-degree Triple Diamond Prototype) and Xander Schauffele (9-degree Triple Diamond Prototype). Few driver details are available, but Callaway Tour rep Jacob Davidson confirmed a number of players were impressed by the tighter dispersion, during a recent interview on GOLF’s Fully Equipped podcast.

Justin Thomas chose to break in a new driver at the Sentry Tournament of Champions after seeing an uptick in ball speed with Titleist’s TSi3. Working with Titleist Tour rep J.J. Van Weezenbeeck, Thomas found the combination of a 9-degree TSi3 head and Fujikura Ventus Red 6X helped push ball speeds from 176 mph to 179 mph, and drop spin from 23000 RPMs to 2100 RPMs.

“It’s just so fast,” Van Weezenbeeck said of Thomas’ TSi3. “His ball speeds were up at least a couple miles per hour versus his TS3, and with the new shaft we were able to dial in his launch and spin and get him that ball flight that he loves to see and gives him the most confidence.”

Thomas gave TSi3 a shot late last year but didn’t feel comfortable enough with the setup to proceed at the time. The speed was there, but so was a left bias that was eliminated after additional testing was conducted with Van Weezenbeeck.

“I loved it as soon as I hit it,” Thomas said. “I just, I couldn’t find something that reacted the same as mine. I think that it’s faster, it looks better, it feels better, everything about it is better. I just didn’t hit it better than my gamer. And that was the hardest part is I never really had long enough time off to kind of give it two, whatever, a week, two, three weeks of testing and hitting, going out and playing a bunch of rounds in different winds in different conditions, to try it.

“I used it for a couple days in Las Vegas and it was a little bit too left bias for what my driver, my gamer was, and I feel like I finally got it to where when I make the swing that I want, when I look up, it’s doing the ball flight that I feel like it should.”

Adam Scott worked on two clubs during the brief offseason — the most notable change being the putter. Scott went away from the broomstick and tried out a Scotty Cameron Select Tour Fastback with an arm-lock grip to see if it could help improve his putting. The mallet head is the same one he used in 2019 when he nearly won Torrey Pines (runner-up) and finished T7 at Riviera.

Scott also replaced his 16.5 Titleist TS2 3-wood with a 15-degree TSi2 that allowed him to fill the wider carry gap that had been created by his newfound distance gains with the TSi4 driver. In addition to the 3-wood, Scott now carries a 21-degree TSi2 7-wood.

Callaway’s Epic wasn’t the only new driver to make an appearance at Kapalua. Dustin Johnson (10.5 degrees) and Collin Morikawa (9 degrees) made the immediate jump to TaylorMade’s SIM2 and SIM2 Max. Morikawa chose to overhaul a few other pieces of gear in the bag, including the 3-wood (SIM2), putter (Spider FCG) and golf ball (new TP5). Sergio Garcia followed Morikawa’s lead and added the new TP5X as well.

Tony Finau was busy adding weight during the winter break. More specifically, swing weight to his entire set of Ping Blueprint irons. Struggling to corral a left miss, Finau found that roughly 2.5 swing weight points was enough to straighten out the issue. Finau’s set went from D3 to D5.5, a noticeable uptick when you consider how spec-specific some players can be.