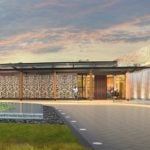 A design sample of the clubhouse at The Grove XXIII, from the architectural firm NBWW.

If you’ve been watching ESPN’s “The Last Dance” the last four Sunday nights (and again tonight), then you are well-aware of Michael Jordan’s love for the golf course.

But did you know he actually has his own golf club? Well, he does, because why wouldn’t he? Here are five things you should know about Jordan’s uber-exclusive golf club.

Jordan’s course is named The Grove XXIII, with the Roman numeral 23 a nod, obviously, to Jordan’s number (for most of his time) with the Chicago Bulls. The club, located in Hobe Sound, Fla., officially opened in the fall of 2019, but it had been in the works for quite some time. Reports first surfaced in 2015 that Jordan was interested in building his own exclusive retreat, and it was around that time he secured the South Florida land where his current club sits. Jordan is the principal owner.

2. There are fewer than 100 members and it’s invite-only

The club reportedly has an extremely small number of members, which, according to reports years ago, was exactly what Jordan had in mind when he decided to create the club.

“The course was unbelievable,” Hamlin told USA Today. “There’s only 75 members. Hopefully to be 76 here in the next few weeks, so it was really an honor to be invited and be a member at such an exclusive place. It’s really new, just a few months old. It’s going to be fun to do for the next 20 to 30 years, as long as I’m able to play.”

3. At least one soon-to-be member is a Masters champ

Phil Mickelson went on The Dan Patrick Show last week and said he was in the process of joining Jordan’s club. “Fortunately I know a number of members there,” Mickelson said. “My wife and I just bought a lot fairly close to there, it’s only about 10-15 minutes away, so it will be a great place to play and practice.

4. The course can be played in several different loops

According to Golf Digest, the course, designed by Bobby Weed Golf Design, has a double-helix routing, meaning it can be played in four nine-hole combinations or three- to six-hole loops.

5. The clubhouse is far from old school

The futuristic clubhouse was designed by NBWW architectural firm, and its 15,000 square feet consist of men’s and women’s locker rooms, lounging areas, a pro shop and dining room. “We wanted the precision and flow of the golf swing as well as Michael’s athleticism and corporate finesse to inspire the contemporary form and detailing of the clubhouse architecture,” said NBWW’s Don Wolfe on the company’s website.