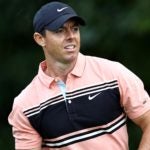 Rory McIlroy shot a seven-under 63 on Thursday at the Travelers Championship.

As a number of positive coronavirus tests led to a handful of late WDs on Wednesday before the Travelers Championship, the murmurs began. Rory McIlroy’s press conference was canceled — so was that of Webb Simpson, who later withdrew due to a positive test in his family. When the PGA Tour announced that its commissioner Jay Monahan would address the media at 2 p.m. ET, many feared the worst. Would Monahan pull the plug on the event?

Instead, Monahan stressed that the Tour would essentially be going full steam ahead, albeit with some additional safety protocols. Golf fans largely celebrated the decision, though others, like our own Alan Shipnuck, emphasized caution.

McIlroy finally got his chance to address the press a day later than scheduled, this time after a first-round seven-under 63. He made it clear: he’s siding with Monahan.

“I thought Jay did a wonderful job yesterday, just relaying the information and where the PGA Tour stands and where we’re going going forward,” he said. “I think people — you hear one or two positive tests and people are panicking, and I saw a couple of calls to shut the tournament down, which is silly from my point of view.”

McIlroy cited the numbers that Monahan had used in his presser, which highlighted just seven positive tests out of 2,757 conducted across the PGA Tour and Korn Ferry Tour (inclusive of volunteers, media and Tour staff as well as players).

“The percentage of positive tests is a quarter of a percent,” McIlroy said. “I think as a whole, it’s been going really well. There’s a couple of loose ends that we needed to tidy up, and I think we’ve done that. So yeah, I feel like the mood and the tone of the event was probably lifted by Jay yesterday.”

McIlroy’s sentiments were echoed by a number of other players coming off the course at TPC River Highlands on Thursday, including Sergio Garcia and one of McIlroy’s playing partners, Phil Mickelson.

“When you have 400 people out here, between players, caddies, instructors, whoever else, to only have two or four people and then I hear a couple of them are false positives or they tested negative since or what have you, I think that’s remarkable, the math on that,” Mickelson said.

“Whoever thought that we were going to come out here and it was going to be zero positive tests, I don’t know, was living in la-la land. That doesn’t happen,” Garcia added. “One, two positive tests here and there, it’s normal.”

There were zero positive tests reported at the PGA Tour’s return at Colonial. At the RBC Heritage last week, Nick Watney withdrew on Friday after a positive test. This week in Connecticut, Cameron Champ tested positive, the caddies of Brooks Koepka and Graeme McDowell tested positive, and a family member of Webb Simpson tested positive, too. Each of those players (plus Chase Koepka) withdrew as a precautionary measure.