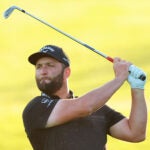 Jon Rahm hits a shot on Thursday on the 10th hole during the first round of the Mexico Open.

Jon Rahm, ahead of this week’s Mexico Open, was waxing poetic. Reflecting on a year that hasn’t seen him win yet, but also one where he believes his game is in good shape, Rahm said: “Actually, golf is life; sometimes you just don’t get the results you want.” Of course, sometimes you do. Here are three things you need to know after Thursday’s first round at Vidanta Vallarta in Vallarta, Mexico.

Rahm, who hasn’t won since his victory at last year’s U.S. Open, carded five birdies, one eagle and no bogeys for a seven-under 64, and he leads by one with Jonathan Byrd, Brendon Todd, Trey Mullinax, Bryson Nimmer and Kurt Kitayama. At six-under are four players, and 10 players are two shots back.

“Yeah, really comfortable off the tee,” Rahm said. “It’s not like it’s ever bad, but today felt especially comfortable. It’s not the most demanding golf course off the tee, right, besides 10 and maybe 1. You’re not really in real danger of being in bad position, but even though it’s generous, when I’m hitting shots the way with the trajectory and the ball flight that I wanted, it just gives me more confidence for every other shot. I was really comfortable out there, so it reflected on the score.”

Notably among the leaders, Byrd shot a front-nine 29, with six birdies.

“I mean, I got off to a hot start,” he said. “You know, you stand on that first tee and you’re just trying to not hit it right. Try to hit the fairway on the first hole and just kind of plod along. That was kind of my mindset today, just plod along around the course and stay as committed as possible. …

“It was a hot start, but I hit a lot of good shots and you just kind of, when you catch a run, you’ve just got to press down the pedal and see what you can get out of it.”

Sahith Theegala is one back

Shooting 65s were Sahith Theegala, Aaron Rai, Aaron Wise and Scott Brown. Among the group of 10 with 66s was Charles Howell III.

Three back of the lead were 13 players, including Patrick Reed, Gary Woodland and Cameron Champ.

Tony Finau is seven behind