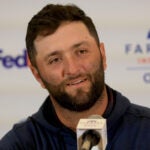 Jon Rahm addressed the media ahead of this week's Farmers Insurance Open.

SAN DIEGO — Jon Rahm doesn’t seem like a guy who lives with many regrets.

Other PGA Tour pros, concerned with maintaining squeaky-clean images, might have rued becoming the subject of a viral golf video, as Rahm was this weekend when he decried the setup at the American Express.

“Piece of s— f— setup. Putting contest week,” Rahm said as he walked off one of the greens. The outburst quickly made the rounds.

But Rahm didn’t backtrack, nor did he write off the moment as mere frustration. Instead, he doubled down.

“My reaction? I mean, the video’s pretty self-explanatory,” Rahm said on Tuesday, addressing reporters ahead of the Farmers Insurance Open.

Asked if he’d like to take back the colorful language, Rahm seemed reluctant to take any sort of mulligan.

“I mean, if I knew somebody was recording, I wouldn’t say it the way I did, but I was just thinking out loud and letting some frustration out because that’s what I felt, right? No matter where you hit it, you’re going to be able to hit it on the green and it becomes a putting contest, who can make the putts. That’s about it; there’s no premium for anything else.”

The video found a vein because it fed into two pre-existing beliefs: 1. PGA Tour pros should face tougher tests and 2. When Jon Rahm is running hot, he’s must-watch television. (Heads up: that colorful language is in the video below.)

And Rahm included himself among the players he thought should have been more severely punished for shots hit off-line.

“I can tell you right now with the way I struck the ball last week and the way I putted, if it was in, let’s say, major championship conditions, I probably wouldn’t have made the cut let alone finished 14th, or I shouldn’t have, I believe,” he said. “I just think it was a bit too easy for the best players in the world. That’s just my opinion.”

To his credit, Rahm has a clear vision as to how Tour pros should be tested each week, a vision in line with traditional U.S. Open golf — as well as the style of golf demanded by Torrey Pines’ South course this week.

“A lot of it depends on the golf course, but I would like a setup that would challenge us in every aspect of the game,” he said. “I like fairways to be narrow, I like the rough to be up so you can’t just miss the fairway and go for the green with whatever you want. I would like the greens to be firm. They don’t need to be ridiculously firm, but firm. And I’d like greens at the right speed.”

Rahm acknowledged that various factors mean setups will be different in different locations — he cited the difficulty of overseeding rough in the desert and the impossibility of greens Stimping to 13 at a course like Torrey Pines — but insisted that the best setup identifies the best player.

“I think a golf course that would challenge us in every aspect of the game and that’s where I believe you would find the best player, somebody whose whole game completely is playing good throughout. And if something is missed, you have to make up with really good stuff on the other parts of your game,” he said.

How many setups regularly satisfy that requirement? Rahm cited the majors, the Players Championship and a handful of regular Tour stops. He likes Torrey Pines because it’s always challenging, regardless of year. Same with Genesis Invitational host Riviera, Memorial host Muirfield Village and Colonial, which doesn’t have long rough or extreme length but proves a tough test regardless.

Rahm seemed particularly comfortable handling questions on the subject, and with good reason. He’s the No. 1 player in the world. He’s a major champion. He has settled happily into married life and fatherhood. The combination seems to have led to self-assurance at the podium. Particularly at Torrey Pines.

This is an especially comfortable venue for Rahm, a past champion at the Farmers as well as the defending U.S. Open champ at this same venue. He and his family visit San Diego with regularity, he said, and reminisced on getting engaged to his now-wife Kelley on the trails bordering the course.

“You know, that was the one and only time I’ve gone on the trails,” Rahm said. “I feel like it’s this thing, right, where nowadays you’re expected to have this massive movie proposal and you see it on social media and they have this massive production. I told her for years, ‘When we do it, we’re going to be in sweatpants.’ She didn’t believe me. So in fact we were in sweatpants on a hike and it turned out to be great.”

As for the course itself? Rahm believes it satisfies his requirements for a PGA Tour test.

“There are golf courses that are going to be challenging regardless,” he said. “Like this one.”