The legends (and realities) of Tony Finau, unlikely golf superstar 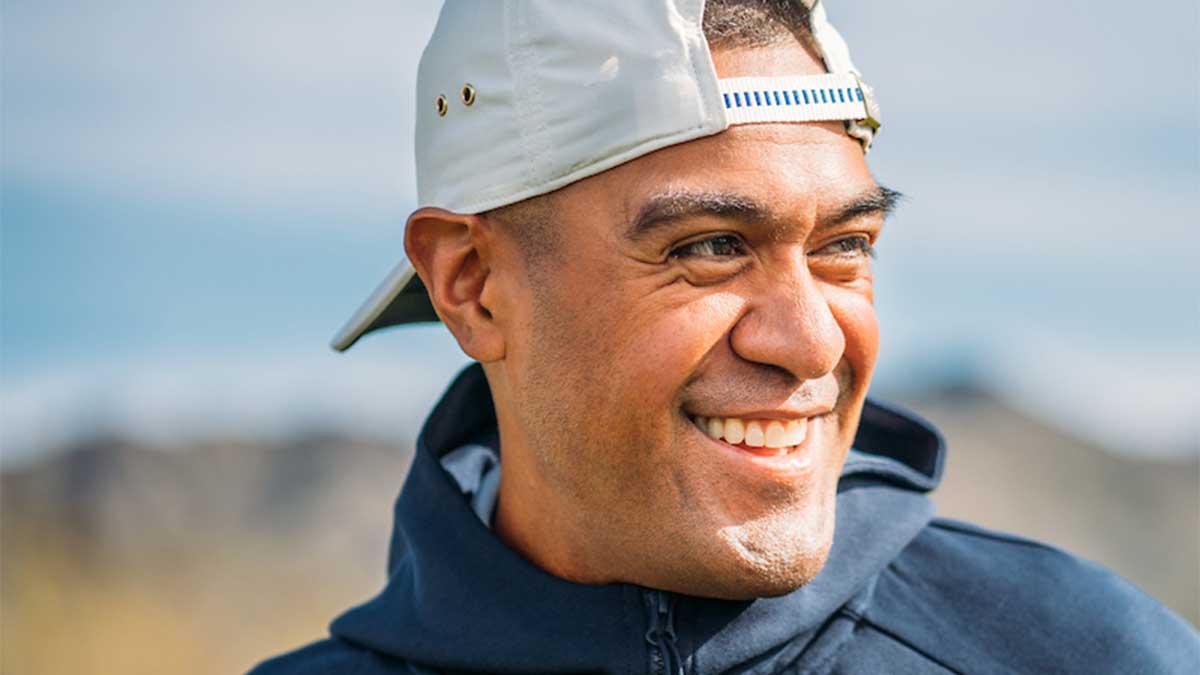 Tony Finau, 30, has one PGA Tour win and has finished in the top 10 in five of his last eight major starts.

Tony Finau peers across the range to a group of golfers at the other end, some 320 yards away. In other words, a safe distance — for most golfers.

It’s our photo shoot, but he’s in charge. He picked the time (9 a.m.), the place (Silverleaf, in Scottsdale), the outfit (the one you see on the cover of our May magazine). He looks decidedly comfortable in this atmosphere; answering rapid-fire questions while having his picture taken. The first impression you get from Finau on a golf course is that of power. But the second feeling — that comfort — is more enduring.

It’s infectious, too. Finau’s here to have fun. To talk smack. Gary Woodland’s name comes up, and his recent claim (during a taping of GOLF.com’s “Subpar”) that, in a hoops game to 11, no other golfer would get past 4 with him. Finau laughs. “Woodland can claim to be the best because he’s the only guy who played in college,” he says. “I’m bigger, taller, faster, stronger and more athletic. I’ll take him anytime.”

The power’s been there a while. The comfort took longer. It’s only in recent years that Finau, 30, has become one of golf’s household names, but he’s been at all of this for quite a while. He turned pro nearly half his lifetime ago. To see him here, pummeling balls into the Arizona sun in a freshly pressed Nike hoodie and out-of-the-box size 14s, it feels like this was always how it was supposed to turn out. Like it was inevitable.

There are a select few in the game of golf whose origin stories sound like fables. Tiger Woods broke 80 at the age of eight. J.B. Holmes joined his high school golf team in third grade. When Rory McIlroy was 15, his father wagered he’d win the Open Championship within 10 years — and he did.

With the legend of Tony Finau, where do you even begin?

There’s young, never-played-golf Tony, spinning a lit fire knife in his hands, moving to the music. He’s learning hand-eye coordination — the high-stakes kind — by way of a tradition of his Samoan heritage: fire-knife dancing. He’s learning that sometimes, even when you’re trying your hardest, things hurt. He’ll keep learning this.

There’s eight-year-old Tony, headed to the garage with his younger brother Gipper and his father, Kelepi, at their home in Rose Park, a tough neighborhood of Salt Lake City. The Finaus are inspired by the young man of color who’s just won the ’97 Masters, but there’s no way they can afford range balls, not when you consider how many they plan to hit. No matter: They’ve made their own range. It’s comprised of a mattress and a net and every golf-related video and book they could find at the library. The Bash-Bros-to-be hit there for two, three, four hours a night. They can’t see where the balls fly, but — hoo boy — do they learn the feel of a perfect strike.

There’s Tony on his graduation day in 2007 — 17 years young, playing golf several hours from his high school. He’d always figured college was in his future — BYU or UNLV, maybe — but something has come up. An opportunity. His parents have accepted a businessman’s offer to front the $50,000 stake for a big-money Las Vegas made-for-TV exhibition. He wins $100,000. His amateur days are over.

There’s Tony, six weeks later, playing at the U.S. Bank Championship in Milwaukee. No. 16 is 380 yards, downhill. John Daly always wanted to drive the green but never quite could. Each day, fans queue up to watch Tony take it on. He likes a crowd. He hits the green three days and finds the greenside bunker the fourth. He leads the field in driving distance that week, and it’s not close.

There’s Tony, with Gipper at his side, two young pros at the peak of their powers, taking on Utah’s Wingpointe Golf Course on a mild midwinter day. No. 7 is a 531-yard par 5, and it’s downwind and firm. Gipper mashes a high draw down the middle. Tony does the same. “We both grew up killing the ball,” he says. They drive toward the 150-yard marker. They keep driving. Tony’s on the front edge of the green. Gipper’s by the back fringe.

I have a lot of faith — I’m always hopeful. I think that’s why I am where I am. Tony Finau 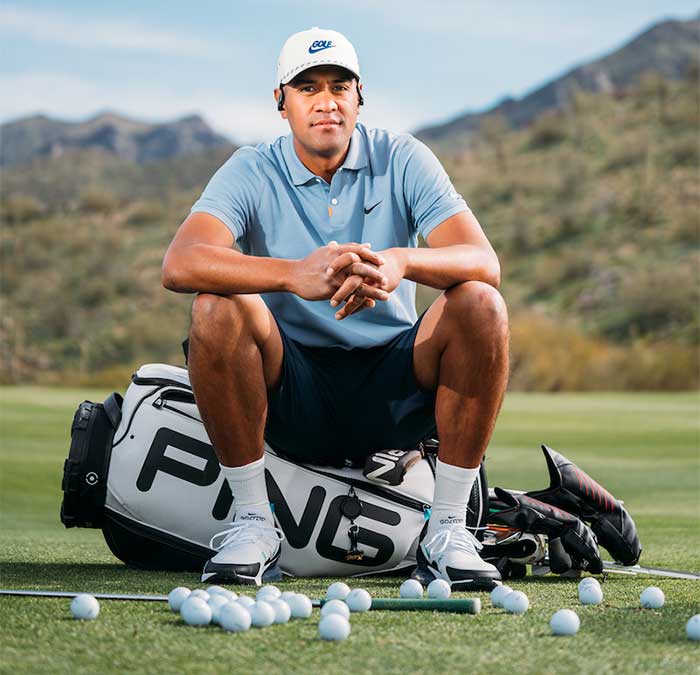 There’s Tony at 28, a father of four, celebrating a hole in one at his first-ever Masters. It’s the Wednesday before play starts, and he’s aced No. 8 in the Par-3 Contest, and then — gah! — you’ve seen the rest in replays. His ankle turns sideways, fully dislocating, drawing shrieks from the crowd. Acting out of instinct, out of embarrassment, he pops it back in. His tournament’s over, surely, in heartbreaking fashion. Except then he shoots 68 the very next day, and he shoots a Sunday 66 to crack the top 10. Who does that? Who does any of this?

There are legends and there are expectations. It’s dangerous, getting as good as Finau has. Expectations get thrown out of whack. An uncomfortable word gets tossed around: underachiever. Finau has recorded five top 10s in his last eight majors. In his last three and a half Tour seasons, he has been the runner-up seven times. But he’s won zero times over that stretch. His lone victory remains at the opposite-field Puerto Rico Open in 2016. He insists he’s not worried by the close calls. “I have a lot of faith — I’m always hopeful,” he says. “I think that’s why I am where I am.” Still, his reward for becoming a top-15 player in the world is that he now has to answer some version of “Why don’t you win more?” every time he steps to a microphone.

Those expectations exist in a bubble. They don’t factor in the five times Finau went to Q-School and came up short. They don’t consider that before him, no player of Tongan or Samoan descent had ever played on Tour. They look past the fact that Tony has ascended to the top of the game while Gipper — the youngest player ever to make a Korn Ferry Tour cut at age 16 — has never earned status on any tour, a casualty of the pro ranks’ razor-thin margins. The names of midsize North American cities roll off Tony’s tongue: Calgary, Alberta. Kingston, Ontario. Midland, Texas. “You want firm? Head out to Midland. That’s, like, Texas links!” These are hardly big-time PGA Tour stops, but they’re places he’s contended in tournaments. He has been blessed with talent, for sure. But none of this was a given. Every day, he overachieves.

Forget legends and forget expectations. Here is Tony Finau’s reality: Before every round, he makes sure to do one thing: say a prayer. A member of the Church of Latter-Day Saints, he asks for consistency in his thoughts and the ability to enjoy the moment. Nothing about scores. After rounds, Finau shifts his focus to helping his wife, Alayna, shoulder the challenges of raising four kids, each under the age of 10. Their focus is on helping him, too. Family. Faith. Golf. These are Finau’s priorities. “In that order,” says his coach Boyd Summerhays. “He takes what he believes pretty seriously.”

Wherever golf sits on his priorities list, the reality is that Finau has developed a near-bulletproof game. Under Summerhays’s guidance, he’s harnessed that power. His irons, his wedge game, his feel shots — they’ve never been better. The key isn’t the power, anyway — it’s the contact, honed against a mattress in the garage. When his streaky putter cooperates, there is only a short list of players who can keep up.

And the reality is, he keeps plenty of gas in the tank. On Tour, most of Finau’s swings look like chip shots. “The shorter the swing, the less you can mess up,” he points out. They still carry 300 yards. After once watching him record 180- to 182-mile-per-hour ball speeds on several consecutive drivers, Ping Tour rep Kenton Oates recalls asking him to dial it up even more. “And just like that, his next swing was 194 mph,” Oates says. “Most guys have 2 to 3 mph left in the tank. He’s got 15, at least.” Finau hit 200 mph shortly thereafter.

The reality is, Finau has a good chance to make his third consecutive U.S. Team when this year’s Ryder Cup rolls around. Last time, Summerhays’s son Preston made the junior team. That was cool for both of them. Tony calls Preston all the time to see how he’s playing. “He’s a ridiculously generous guy,” his coach says.

The reality is, Finau dived into professional golf to make money, to help his family. He’s made nearly $20 million in PGA Tour events. He’s plenty comfortable out here now. He’d like to stay a while.

Oh, and that question he’s getting sick of? When’s that big win coming? He’s found an answer, one he believes, and he’s ready to use it at his next tournament — whenever that will be.