Who is Abraham Ancer? The question’s more complex than you might think 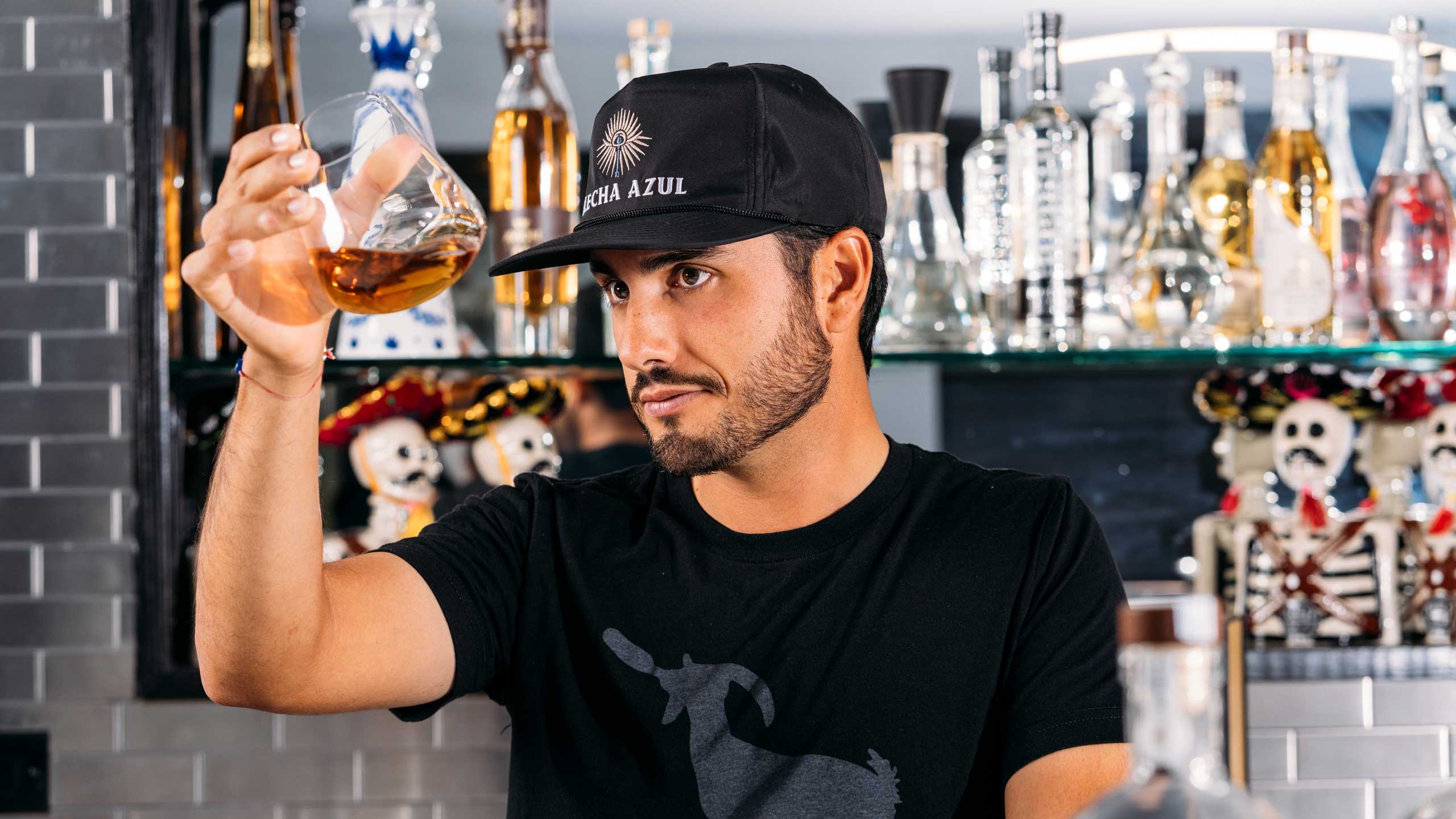 Abraham Ancer admires a pour of tequila at his home in San Antonio.

It’s 31 degrees in San Antonio. Freezing rain has turned to sleet, and tiny pellets whiz past the front of the hitting bay at Dead Solid Perfect, an unassuming driving range with an increasingly flooded landing area. Abraham Ancer, the 27th-ranked golfer in the world, corrals another ball from the pile in front of him.

“Okay, I’ll hit a high draw,” he says. He closes his stance, stares down his line and takes a rip with 7-iron, launching a beat-up golf ball toward a distant blue target. The ball turns right to left mid-flight, just as he said it would, before the brutish sideways wind knocks it from the sky.

“Now the high cut!” Again, he sends a ball soaring, this one starting straight and falling right, landing with a splash.

San Antonio isn’t supposed to get this cold. A gust sends sleet in our direction, coating him with a freezing mist. He yelps but smiles, pressing on through an entire bucket of balls, sharing his swing thoughts, warm-up routines, preferred shot shapes. Then he flips me the club, laughing as he sees me shivering.

If Ancer seems surprisingly at ease under the circumstances, that’s because he is. This is his driving range — he and a friend bought Dead Solid Perfect, a San Antonio mainstay, several years ago. It’s his golf swing, too. Ancer has never had a swing coach, which means his action is his own. And there’s the bottle of tequila sitting nearby, which Ancer cracked open just after 9 a.m. That’s his too; Ancer is cofounder of top-shelf Flecha Azul. “Heavy pours only,” says the eager host, as he hands over a glass of liquid gold that warms us from within.

Most top pros wouldn’t step out of their homes in these frigid temps. Ancer isn’t most top pros. “Look! I trimmed my beard for you guys,” he says. “We’d better get some good photos out of it.”

Casual golf fans were introduced to Ancer in November 2020, when he played so well in his Masters debut he was T-2 entering the final round. He cut a striking figure alongside that day’s playing competitor, Dustin Johnson, who’s nine inches taller, 30 yards longer and owns 28 worldwide wins to Ancer’s two. Ancer, who just turned 30, may not be golf ’s longest or youngest rising star, but he’s learned to embrace his underdog status. That’s how he made it to golf ’s most vaunted tee time, the final group on Sunday at Augusta National, from a world away.

Ancer was born in McAllen, Texas’ southernmost tip, but grew up just across the border in Reynosa, Mexico. His father, Abraham Sr., who hustled to keep his family solidly middle class, caught the golf bug in his 20s and regularly brought his son to Reynosa Country Club while he was still in diapers, hoping he’d fall in love with the game through osmosis. It worked.

Ancer fondly remembers the afternoons they’d while away at the course. Dad would play 18 with his friends while his boy hung around the practice area. Then they’d play nine together. After, while his father played cards in the locker room, Abraham would be outside with his friends, chipping and putting as night fell.

Plenty of Ancer’s lifelong motivations are rooted in those days: his love of a lengthy practice session, his sense that life is meant to be enjoyed, his desire to make golf more accessible for kids of all backgrounds.

At the time, there was no guarantee he’d have a future in golf. But as Ancer kept getting better, his family did everything they could to give him the opportunity. That meant earning extra money to pay tournament fees. But the Ancers—Abraham Sr., his wife, Veronica, and young Abraham’s sisters, Claudia and Sayra—specialized in a far scarcer resource: belief. Whenever someone pointed out the long odds of a kid from Reynosa making it to the PGA Tour, Abraham Sr. would smile, unworried.

Ancer knew he’d need to leave Reynosa for his golf dreams to blossom. In 2005, at age 14, he took advantage of his dual citizenship to attend Sharyland High School in Mission, Texas. Ancer’s uncommon level of discipline stood out to the school’s golf coach, who’d never seen anyone quite like him.

Despite a standout high school career, Ancer received just one offer to play college golf: from Odessa, a junior college in west Texas. He accepted immediately and made the most of his year there, winning medalist honors in six events, including one stretch in which he won five of six starts. By the time he’d won the Jack Nicklaus Award as the nation’s top junior college player, Ancer was on the radar of D1 coaches. He ended up transferring to Oklahoma, where coach Ryan Hybl said it took him “about two holes” to realize what kind of golfer he’d added to his roster. Ancer thrived as a Sooner, too, winning twice in his first season. He’d go on to post the second-lowest career scoring average in OU history, behind only Anthony Kim.

After graduating in 2013, Ancer went directly to Q-School, where he earned conditional status on the Korn Ferry Tour for the following year. But just as his pro career began, the unimaginable happened: Abraham Sr., his partner in dreams, died of a heart attack. The loss hit him hard.

“Still, to this day, it angers me a little bit,” Ancer says. “And it makes me sad. I know my dad’s watching me play, but not being able to share it—man, I really, really miss that.”

The playing season was a wash, but that fall he made it through Q-School, earning full status on the Korn Ferry Tour for the 2015 season. In his fourth start, he finished second in Brazil. Three months later he earned his first professional win in Nova Scotia. He was guaranteed a PGA Tour card.

Of course, getting to the PGA Tour and staying there are two different things. Ancer arrived wide-eyed at the 2015 Safeway Open for his first Tour start. As he warmed up on the range that chilly first morning, Rory McIlroy set up next to him.

“He started hitting 5-irons, and the ball is taking off like, whoosh, flying 220 into the wind,” Ancer says. “I was like, ‘That’s insane. That’s not the kind of game I have!’ ”Ancer started making changes. He tweaked his equipment and his swing, trying to hit the ball higher, harder, farther. He missed his first eight cuts. “It was terrible. I played some of the worst golf that I really ever played,” he remembers.

It took a year of relegation to Korn Ferry for Ancer to recapture his game. By the time he re-earned his Tour card, he’d made some subtle, critical changes. He controlled his distances better. He sharpened his short game. He took better care of his body. Most importantly, he learned that improving his own game was more effective than stealing someone else’s.

In the three years that followed, Ancer developed into one of the Tour’s steadiest players. In 2018, he posted a handful of top-fives and scored his biggest win yet at the Australian Open. The next year was even better: He qualified for the Tour Championship and became the first Mexican golfer to compete in the Presidents Cup, where he dazzled an international audience with a 3-1-1 record.

Off the course, Ancer began taking his not inconsiderable Tour earnings — nearly $10 million to date — and giving life to the entrepreneurial streak he’d inherited from his father, who sold everything from cars to security systems in his whatever-it-takes career. At the Fort Worth Invitational in 2018, a chance pro-am pairing with Aron Marquez, the Mexican-born CEO of Wildcat Oil Tools, turned into Flecha Azul. Other expansive projects followed, some in the business world—like Black Quail Apparel and an innovative distribution deal with clubmaker Miura—some on the home front, like his 1,500-acre Hill Country ranch and the man cave he tricked out in his San Antonio digs.

Side gigs are sometimes distractions for pro golfers. Ancer insists these pursuits have lifted his game. “If I’m only focused on golf, it can drive me insane,” he says. “My other businesses help me stay focused on whatever I’m doing at the moment.”

Ancer’s approach worked wonders in 2020. In 21 starts, he posted more runner-up finishes (two) than missed cuts (one) and rose to a career-best 20th in the world rankings. Better yet, he got to test his game on golf ’s grandest stage when he qualified for his first Masters.

He looked shockingly comfortable in his first week at Augusta National, playing his way into Sunday’s final group—only to fade to T-13 with a final-round 76. He’s relieved he’ll get another chance this April. Asked what part of golf makes him the happiest, Ancer heads back to that moment. “You feel a lot of emotions, more than really anywhere else, when you’re in contention,” he says. In Ancer’s mind, his career is just beginning. And when he’s building, he’s thriving.

If he ever allows himself a moment to do so, Ancer might reflect on what he’s already built — a burgeoning business empire, a diverse group of friends, an airtight golf game, a career every Mexican golf fan can point to with pride. His preference, though, is to keep his head down. He gets recognized in public more often since contending at the Masters. But he also knows just how fine the line is between being a good golfer and a great one.

At home, three trophies sit in the corner of Ancer’s office. Two mark his professional victories. The third comes from winning the Reynosa Club Championship as a teenager. To figure out where he’s going next, he’s determined to never forget where he’s been.