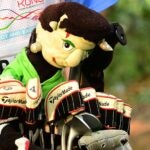 Iron covers are usually blasphemous, but this is a worthy exception.

One look at Aaron Rai, and it’s immediately clear that he will not be receiving an invite to next year’s Met Gala. In fact, the 26-year-old European Tour pro wouldn’t even earn an invitation to the next meeting of Fashionable Golfer Quarterly (if such a publication existed).

This is because Rai is a living, breathing golf fashion faux pas. Worse yet, he’s aware of it — and wholly unwilling to change.

Yes, it’s possible the first two things you’d notice about Rai are his gloves (plural). He is one of the few professional players to experiment with wearing gloves on both hands. Or perhaps, on a chilly day, you’d notice the long sleeves protruding from underneath his polo. These are questionable decisions for the fashion-forward golfer, but they pale in comparison to his highest crime — a decision so unsavory and unforgivable, it’s certain to send even the most benevolent golfer into a fit of rage.

For the last nine years, Rai has played professionally across the world, and at every stop along the way, he’s brought his covers with him. They are leather and canvas, all (gulp) eight of them, and yes, they do help to keep his clubs in fine shape. But as Rai explained in an interview on SiriusXM PGA Tour radio, that’s not quite why he uses them.

The origin story of this would-be super-villain begins with his father.

“I grew up in very much a working-class family, and golf has always been a very expensive game,” Rai said. “I started from the age of 4 years old, and my dad used to pay for the equipment, pay for my memberships, my entry fees. And it wasn’t money that we really had, to be honest, but he’d always buy me the best clubs.”

Rai began to ascend up the junior ranks, but his family’s financial situation remained strained. Young Aaron grew, as children do, and soon, his clubs were too small for him.

“When I was about seven or eight years old, [my dad] bought me a set of Titleist 690 MBs, and they were like 800-1,000 pounds back then, just for a set of clubs for a kid. I cherished them,” Rai said. “When we used to go out and practice, he used to clean every single groove afterward with a pin and with baby oil.”

In an effort to keep the clubs — which cost a small fortune — in their best possible condition, Rai’s father purchased iron covers. Thus a tradition was born.

“To protect the golf clubs, he thought it would be good to put iron covers on it,” Rai said. “I’ve pretty much had iron covers on all of my sets ever since just to appreciate the value of what I have, and it all started with that first set.”

Today, as a European Tour professional occasionally making PGA Tour starts in the U.S., Rai has access to more golf equipment than just about anyone on earth. He doesn’t need to protect his clubs — if one gets damaged, he’ll quickly receive a freebie from one of the endless supply of tour reps on-site at most events. But his method of caring for his clubs has remained.

Now, he says, the iron covers serve a different purpose.

“Although on the PGA Tour, we get given equipment, and we get given everything that we need, it’s more out of principle,” Rai said. “The value of not losing perspective of what I have and where I am.”

Well-protected and well-grounded. The Met Gala still isn’t calling. But maybe Aaron Rai is onto something?

“The covers are going to stay, I’m sorry.”