2 things golf’s young stars would be wise to do, according to a PGA Tour veteran 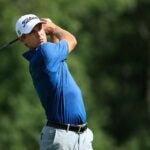 Charles Howell III is in the midst of his 20th season on the PGA Tour.

Long thought of as an “old-man sport,” golf is increasingly becoming younger and younger. At least, that’s the case on the PGA Tour. With a bevy of stars under the age of 25, the Tour is seeing a youth movement that has the sport feeling younger and cooler by the week.

All of that youth leaves plenty of room for growth. No matter how much we liked to think we knew everything about the world in our younger days, as we grow older, we realize that wasn’t quite the case. With age, come experience. That experience can provide wisdom.

That’s been the case for Charles Howell III. The 41-year-old has been on Tour for 20 years now, making him an elder statesman in the new, young and hip era of golf we find ourselves. And though Howell has won just three times in his 20 years, he’s played well enough to keep his card for two decades. That savvy inside the ropes is impressive, but even more impressive might be the wisdom he possesses from those 20 years. Before this week’s Sony Open, he was asked about some of that institutional knowledge and how he would advise some of the young guns on Tour. He offered two nuggets of wisdom that were insightful. Check them out below.

2. Play as much as possible

“I would encourage them to play a lot of golf, being young, because you don’t have the obligation of a family. You don’t have kids. You don’t have a school schedule that you’re dealing with. You’re not booking a father/daughter dance and a this and a that.

“So, while you’re young, my advice is to play a lot. It’s what you do. We are so fortunate to play the game of golf. The places we go; the way they take care of us; the purses we play for; that my advice to these young studs, because they are, they are awesome, is to go play a lot. Enjoy every minute of it.”

Rules Guy: Are you allowed to take free relief from a dirt cart path?